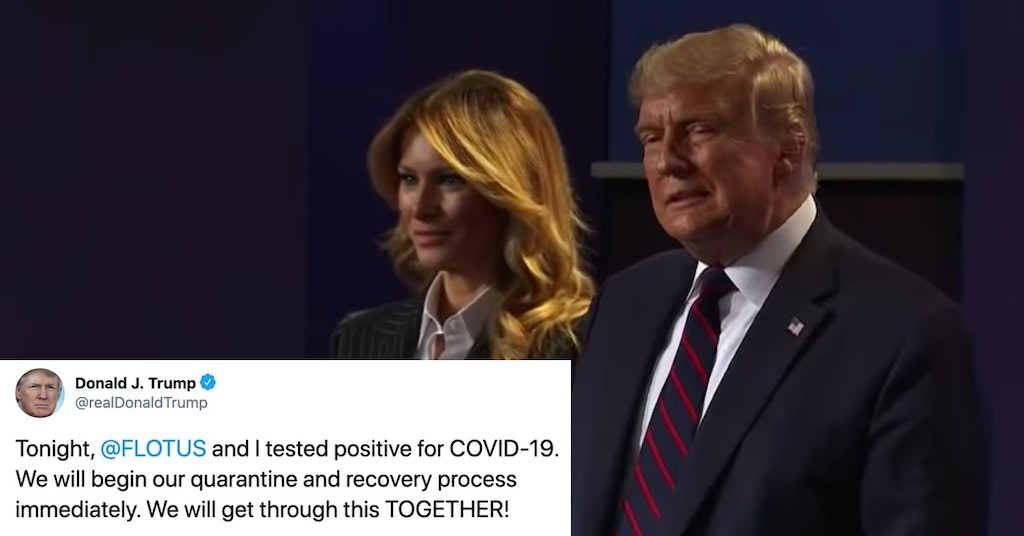 The President of the United States dropped a bombshell last night — he and the First Lady have reportedly tested positive for COVID-19.

The news broke only hours after it was reported that top aide Hope Hicks had tested positive for the coronavirus, which led to wild speculation over the possibility of a wide array of high level political figures having been exposed to the virus. Initially, Trump relayed that he and Melania would be self-quarantining while awaiting results.

But by 1am ET on Friday morning, the president announced that the results were positive. Or, more likely, someone running Trump’s Twitter account who doesn’t refer to a deadly pandemic as the “China flu” made the announcement.

The internet was so stunned that people didn’t know how to react. A number of folks immediately jumped to the conclusion that this must be some kind of stunt, a lie to get out of the debates or win sympathy votes or miraculously “recover” to “prove” that COVID-19 isn’t that bad — a sad and twisted commentary on where the American people are at with our ability to believe in our leader.

Others celebrated the news that the man who purposely downplayed a virus, continued holding enormous social gatherings, refused to do anything useful regarding masks, and is ultimately responsible for the deaths of over 200,000 Americans due to his dismal handling of the pandemic may now suffer thanks to his own hubris.

Either way, if the news is true, it’s difficult to be surprised that COVID-19 spread among people who have often refused to wear masks or social distance, and the commentary is rolling in.

A lot of people are appropriately throwing the Trumps’ words right back in their faces.

While others are really aiming for that high road.

But even if you prefer kindness to pettiness, some of the jokes have been on point.

No matter your outlook, the next couple weeks are about to get interesting.