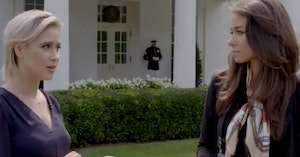 Sacha Baron Cohen somehow managed to get another burn in on Donald Trump weeks after the sequel to Borat was released, thanks to the president’s all-caps quoting of the far-right One America News Network. According to a tweet by Cohen, the “journalist” who reported on the debunked conspiracy theory about Dominion voting machines was the same woman who let actress Maria Bakalova, who played Borat’s daughter, into the White House.

“Nice try, Don,” said Cohen, “your source is an OAN ‘journalist’ who got duped into bringing Borat’s daughter to the White House. Sad.”

The journalist, Chanel Rion, was even tagged in Trump’s loud tweet that consisted almost entirely of her words. In Borat 2, Rion was tricked into believing that Bakalova, who was playing a 15-year-old girl, was a real budding journalist and fan of the Trump administration.

Rion can be seen with Bakalova in a deleted scene that was released on the official Borat Twitter account to promote the film. She was also the reporter who famously asked Trump “do you find the term ‘Chinese food’ racist” in a question clearly meant to defend the president from allegations of racism after he kept calling the novel coronavirus the “Chinese virus.”

Rion and Bakalova seem to spend most of their time together without masks, including when they spoke with Donald Trump Jr.

“OAN is most rigorous news source in America,” says Borat in a voice over. “I know this because they take my daughter into the White House. No need for security tests or COVID test. They boring.”

In one particularly hilarious moment, Bakalova asks Rion why fake news only exists on the left and not on the right. Rion seems to struggle to find an answer before it cuts away.

The only caveat in all of this is that Trump actually misattributed the quote. The report was by OAN’s Lilia Fifield rather than Rion, but it’s safe to say that the entire network was behind the report, and the point is that OAN is terrible. The network has not yet commented.