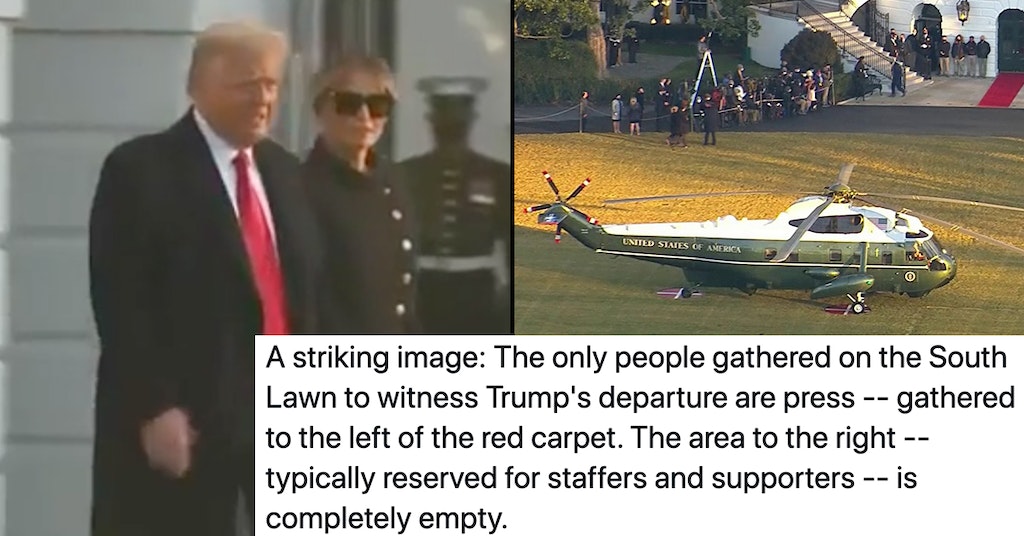 The 45th — and unquestionably worst — President of the United States left Washington, D.C., this morning, running away from an inauguration ceremony his supporters tried to prevent with their recent attack on the Capitol.

Trump waved goodbye from the helicopter, to the crowd gathered to see him go. But a wider shot reveals no crowd, just a small group of the most loyal people still speaking to him after the insurrection.

A generous interpretation of this sad send off would note the pandemic, and the need to keep crowds small. But Trump’s own persistent disregard of COVID-19 safety and mockery of incoming president Joe Biden’s safe and small rallies strips him of that courtesy.

During his final hours in office, Trump issued a shocking 143 last minute pardons and commutations, in addition to the scores he already issued in his final days.

There was nothing for himself, or his family, or his loyal lapdog Rudy Giuliani. The Capitol rioters also went unpardoned by Trump. And on another positive note, there were pardons for a number of people activists had been pushing to see receive justice.

But those positive turns have largely been overshadowed by Trump continuing to use his presidential pardons to help his friends skip out on charges of insider trading, defrauding donors, and secret lobbying. Steven Bannon, Lil Wayne, and former Detroit mayor Kwame Kilpatrick are some of the bigger names, joining the likes of Dinesh D’Souza, Michael Flynn, and George Papadopoulos in being rewarded for their loyalties.

While the MAGA crowd is undoubtedly weeping and gnashing their teeth at their delusional ideas that the election was stolen and America will now crash directly into some combination of communism and socialism as their religious rights are stripped away by the incoming devoutly Catholic president, the rest of the nation is glad to see Trump go.