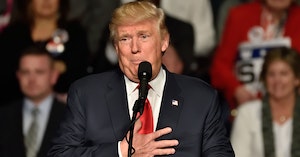 Last week, a pro-Trump group held a conference at one of his Miami resorts. The three-day event had scheduled events with Donald Trump himself, but it also included a fictional video of Trump entering a “Church of Fake News” and opening fire on the congregation there.

Trump supposedly did not see the video, but he is being asked to condemn its contents in the strongest terms. As many have pointed out, there have been many violent incidents in both places of worship and newsrooms, several of them perpetrated by white nationalists who were Trump supporters.

At a conference of Trump supporters, they played a video of our president murdering journalists in a church. Last year, a Trump supporter sent bombs to CNN—and a shooter entered a church yesterday. This video isn’t funny. It will get people killed. https://t.co/XWtq1z38Kc

CNN, one of the news organizations targeted in the video, released a statement, saying, “The President and his family, the White House, and the Trump campaign need to denounce it immediately in the strongest possible terms. Anything less equates to a tacit endorsement of violence and should not be tolerated by anyone.”

The organizer of the event, Alex Phillips, has said the video showing is under review, but that it was part of a “meme exhibit,” not a fun night of laughing at the idea of the president murdering people. And other Republican politicians have come out to say that the video was “goofy” or meaningless and is being taken too seriously:

Find a tweet from a conservative defending the Kingsman video, then do a search for anything they may have tweeted about Kathy Griffin in 2017.

The results won't shock you in the least ???? #TrumpVideo pic.twitter.com/FB3erav1QB

Stephanie Grisham, the White House Press Secretary, has tweeted that the issue is under review and condemnation should be expected from the president. Any second now:

Re: the video played over the weekend: The @POTUS @realDonaldTrump has not yet seen the video, he will see it shortly, but based upon everything he has heard, he strongly condemns this video.

But everyone is skeptical that Trump is capable of saying something sensitive and appropriate on this issue since he has called for violence against journalists in the past, especially at his campaign rallies:

Waiting for Donald Trump to condemn the video of him committing mass murder that was shown at his resort to his supporters, and to apologize to the families of those targeted. #trumpvideo https://t.co/U4M2ukY5sE

We’ll see how low the president can go.