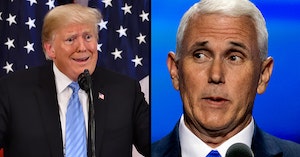 Over a year after he got booted from office, former President Donald Trump is still throwing a fit about losing the election. And now he wants Mike Pence investigated for not helping him overturn the results.

During the months in between the election and the insurrection, the former vice president made it clear to Trump that he could not overturn the results. However, Congress is currently examining the Electoral Count Act to provide more guidance as to how debated results are handled. The changes include simply making it more explicit that the VP has no ability to single-handedly change things.

But Trump apparently took this to mean that Pence previously DID have the power to overturn the results of the election, and seems to think there is some criminal or conspiratorial element as to why he did not.

“So pathetic to watch the Unselect Committee of political hacks, liars, and traitors work so feverishly to alter the Electoral College Act so that a Vice President cannot ensure the honest results of the election, when just one year ago they said that ‘the Vice President has absolutely no right to ensure the true outcome or results of an election,’” he said in a statement released on Twitter.

He point-blank claimed that they lied and said Pence “could have sent the votes back to various legislators for reassessment after so much fraud and irregularities were found.” (Once again, it is necessary to point out that there is no evidence of widespread fraud in the 2020 election.)

Trump also insisted the insurrection could have been avoided had this happened, and said “the Unselect Committee should be investigating…why Mike Pence did not send back the votes for recertification or approval.”

This statement comes on the heels of another from Trump that had the same gist — he feels Pence should have overturned the results of the election and believes he was lied to about the Vice President’s ability to reject the results, something members of Congress continue to say is not the case.

All of this is happening in the middle of the January 6 committee’s investigation into the attack on the Capitol by Trump supporters who wanted the election overturned and Trump reinstated for a second term as president.

The investigation has started turning up shady dealings by Trump and his staff to try to keep him in office or hide proof of their actions, and as more people are subpoenaed to speak to the committee, even more information that looks bad for Trump is likely to come out. So for him to be furiously releasing wild statements calling for investigation into others at this juncture makes sense — he always tries to redirect to get the head off of himself. Maybe this time, with a proper investigation underway, it actually won’t work.