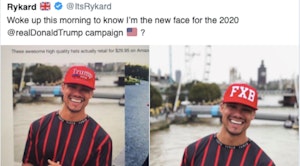 UPDATE: An earlier version of this post reflected accusations blaming the Trump campaign directly for the photoshopped image. It has been updated to reflect the fact that there has been no evidence connecting the altered image to the Trump campaign, but rather to a third party advertisement that appeared on a conservative website. We regret the error.

Red hats have got a pretty bad reputation these days. An ordinary red baseball cap will still have people staring at you weird until they get close enough to confirm whether or not you’re a Trump zombie. It’s like he’s stolen an entire statement color. Hopefully, one day we can disassociate a fun red baseball cap from an authoritarian gas bag racist, but until then, be careful what you put on your head. Especially because Trump supporters are stealing pics.

A man named Rykard Jenkins, who is most famous for appearing on a season of the U.K.’s Love Island reality show, shared a picture of himself that had been photoshopped. His red hat, which originally advertised the FXB brand had been transformed into a Trump 2020 cap above his smiling face.

Woke up this morning to know I’m the new face for the 2020 @realDonaldTrump campaign ???????? ? pic.twitter.com/gl5SqPxKsj

Jenkins seems to have a sense of humor about the whole thing, maybe because being across an ocean from Trump creates enough distance to laugh about being turned into a Trump supporter against your will. He shared a picture of a local news story about the Photoshop job, joking about the Viagra warning below it:

He also used the virality of his original tweet to direct attention to the annual slaughter of whales and dolphins in the Faroe Islands, which included some graphic image I will not share—but feel free to sign the petition in Jenkins’ honor.

While people initially blamed the Trump campaign itself for the theft, the stolen image first appeared in an advertisement on the right-wing website Conservative News Daily.

While he may be more amused than pissed, some people are seeing a pattern of Trump boosters taking images of people of color and photoshopping them to promote the Trump campaign.

publicly touching our hair without consent is no longer the most racist thing you can do to a black person's head https://t.co/bhxqepAbUP

Imagine struggling so much to find a non-white Trump supporter that you just photoshop a random guy to look like he's wearing a Trump hat. And people say Brad Parscale is some kind of genius? This is pathetic. https://t.co/rHguo1m67d

I'm well-aware of the huge online effort on the Right to fake black support for Trump. They even made a bunch of fake twitter accounts using stock photos of black folks. But this…this is getting out of hand. ???? pic.twitter.com/FJEIwIrOQH

So, the Trump campaign has been stealing pics and using them to sell Trump merch for awhile. But this time it's @ItsRykard and he's busting them. @realDonaldTrump you're busted you big fat fraud. @Twitter do your thing. https://t.co/Dr0iuTycTM

A lot of people are encouraging Jenkins to sue:

Come on man. If you feel that way, you might as well be a Trump supporter.

If money is tight, all the more reason to sue the POS.

Find a lawyer and congrats on the bag you're about to win https://t.co/0bPbNvb6TL

I wonder if Trump will be in the Guinness Record books for most lawsuits filed against an individual?…

There is some debate in the comments that images posted online are free use, so Jenkins could maybe at best get his photo taken down. But one thing everyone is on the same page about is that red hats are not safe anymore.

I have a couple of Texas Ranger red hats. I used to get some “OMG-oh-it’s-okay” looks. I stopped wearing them. My orange Longhorn hats are good enough. pic.twitter.com/XioohGxGNz

Just one more reason why I wouldn't even wear a red hat anymore, regardless of what it says.

Even if it was blue, they'd just hue shift it tho. https://t.co/SeZC2xo2El

P.S. This (among several reasons) is why hats that are red are no longer worth wearing. https://t.co/h5Ej7eAOvh

Unless you want to make money:

Nah. Not worth it.