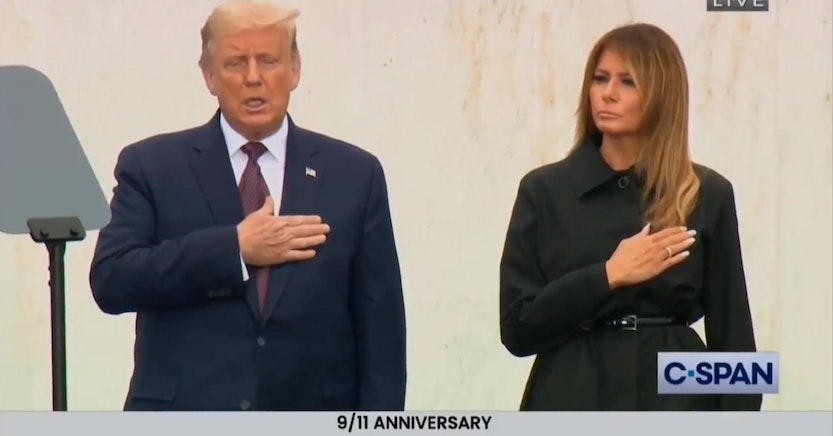 Donald and Melania Trump are attending events commemorating the victims of the attacks on September 11, 2001 today, and people are noticing that something odd happened while Donald was reciting the Pledge of Allegiance at one of them. During the reciting of the pledge in Shanksville, Pennsylvania, Trump appears to stop moving his mouth right at the point when it gets to “under God,” and then continues reciting immediately after.

Two theories have sprung up as the video rapidly spreads: That Trump doesn’t actually know the Pledge of Allegiance very well, or that he just didn’t like the part about God.

For much of the American public, it’s hard to imagine not knowing all the words to the Pledge of Allegiance. Generally, U.S. public schools make their kids recite this pledge every school day. However, Donald Trump definitely did not attend public school.

On the other hand, this is not the first time that Trump has appeared to refuse to recite anything having to do with God or the Christian faith. In 2018, people noticed that Trump stood silently during the recitation of the Apostles’ Creed and singing of hymns at George H.W. Bush’s funeral while everyone else did. He can even be seen holding the pamphlet with the words to each while he stands there doing nothing, so that rules out memory issues.

Even when attempting to appear Christian, Trump consistently does a bad job. In 2015, he was unable to recite a single Bible verse on request during a Bloomberg interview after claiming it to be his “favorite book.”

Just three months ago, he was hit with massive criticism after protesters and clergy were tear-gassed so that he could walk across the street to the St. John’s Episcopal Church and have a weird Bible photo-op in which he looks like he’s holding up a defeated enemy.

This latest blunder with the Pledge of Allegiance has people wondering if Donald Trump even believes in God at all.

Others simply think he doesn’t know the words very well, not missing that Melania didn’t recite it at all. Or that if the Obamas had treated the Pledge of Allegiance like this, right-wing media would have exploded.