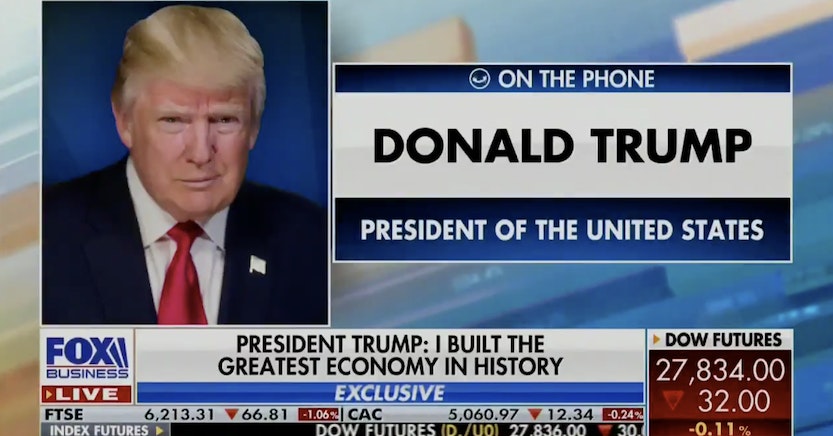 In an interview on Fox Business Network’s Maria Bartiromo, President Trump basically admitted what we already knew: he does not want to fund the U.S. Postal Service because Democrats want to expand mail-in voting during the COVID-19 crisis.

“Now, they need that money in order to make the Post Office work, so it can take all of these millions and millions of ballots,” Trump said. “Now, if we don’t make a deal, that means they don’t get the money. That means they can’t have universal mail-in voting, they just can’t have it.”

This admission makes the reason Trump refused to approve $25 billion in emergency funding for the U.S. Postal Service very apparent.

For months, Trump has been railing against one of our most cherished institutions, saying that increased mail-in balloting would lead to “one of the greatest frauds in history.” He has also said it would be too expensive. But on Thursday morning, he finally explained his actual reasoning and blamed Democrats for trying to make it easier for Americans to vote and stay safe during the pandemic.

“There’s nothing wrong with getting out and voting. They voted during World War I and World War II,” Trump told Bartiromo.

We know Trump wants to drag us back to those days for a number of reasons that only make sense in his deranged mind, but his careless comments truly indicate he doesn’t care about Americans’ health and want to punish those who are scared of going to vote in person this fall.

Nancy Pelosi said as much in her comments on Trump’s refusal to give the USPS extra funding: “So they’re hurting seniors; it’s a health issue. So, when the president goes after the Postal Service, he’s going after an all-American, highly approved-by-the-public institution.”

“This is an assault on our democracy and economy by a desperate man who’s terrified that the American people will force him to confront what he’s done everything in his power to escape for months — responsibility for his own actions,” Biden campaign spokesman Andrew Bates said in a statement.

In the early rounds of coronavirus relief, Congress agreed to a $13 billion emergency grant for the USPS. Trump threatened to veto the bill if it included any direct funding for the Postal Service.