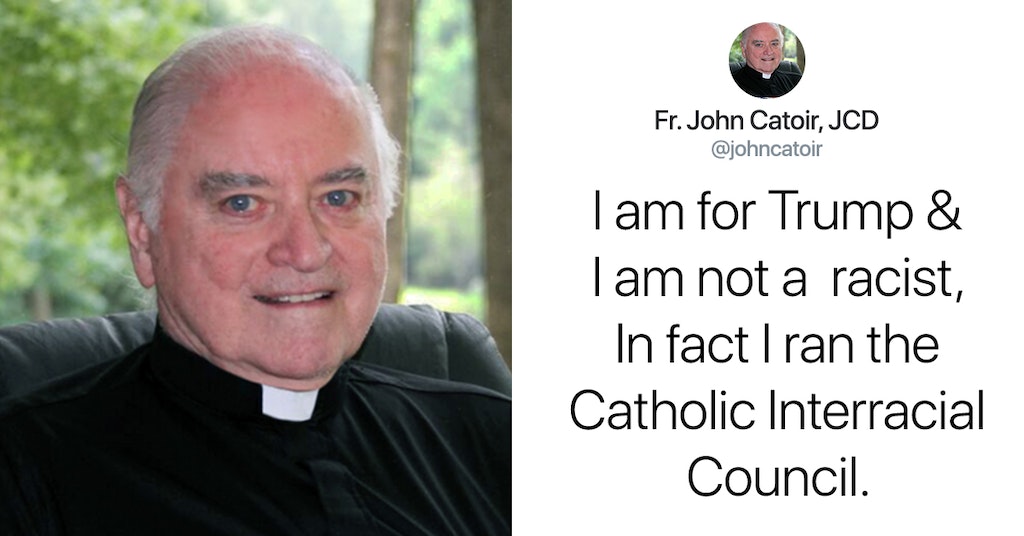 A Catholic priest is getting ratio’d hard after doing the Catholic version of “I’m not racist, I have a black friend.” The priest, Father John Catoir, JCD, tweeted out that he is “for Trump” but is totally not a racist, and as proof, he offered up the fact that he once ran the Catholic Interracial Council.

Yes, he is definitely white.

The Catholic Interracial Council appears to be a now-defunct operation that functioned primarily during the Civil Rights era, ending in 1998. It was formed in 1934 by Father John LaFarge and was remarkably progressive for its day, but for 2019, the idea that people of color should be welcomed in the Catholic church isn’t exactly revolutionary.

And running it for some period of time doesn’t cancel out supporting a President who has inspired mass shootings with his anti-immigrant rhetoric that somehow only seems to target immigrants of color. This is the very reason why Father Catoir is getting dragged so hard right now.

That’s one of the most disturbing things you could have said. Makes me wonder how truly vested you were in the Interracial Council. pic.twitter.com/9TH1wzyxqD

Sir. As a man of strong faith. Let me remind you Hitler was brought up catholic and I’d never support him. I know and I know God does too, you have your priorities messed up. Wake up sir.
Someone is knocking at your door and they’re not happy with you. ????

Racists are always the last to know.

Well! Even more of a reason to be ashamed of yourself.

“I am for Trump and I am not aware of my racism.”

Please list the reasons you are “for Trump” while overlooking his racism. His devotion to indecency? His sadism? His immorality? His lack of ethics? His ignorance? His mendacity? His greed? The kleptocracy? The authoritarianism? The nepotism? Am I missing any reasons? ????????????

Literally the worst type of voter. The “I don’t care if the entire world burns & the fabric of society collapses around me, as long as I get the one thing that I want” people.

Doesn’t matter if that one thing is as major as overturning Roe, or as minor as a $200 stimulus check.

“I’m eating this cake, but I am avoiding the: flour, sugar eggs, or butter” that are baked INTO the cake.

It doesn’t work that way Father and as the product of a Catholic education, I feel you should know better.

I was raised Catholic. My favorite hymn was “Whatsoever you do to the least of My brothers, that you do unto Me.”
You support a man who has done so much damage to the least of our brothers…how do you square that with Jesus?

Not that kind of interracial, Father.

Yo PADRE, I went through 12 yrs Catholic school, was a Eucharistic minister, taught religious Ed & then realized what a farce organized religion is.
In all those years I don’t recall learning that supporting a racist, immoral, corrupt man is a good thing. Go to reconciliation.

All that proves is that the Catholic Interracial Council (where?) hired the wrong man.

I will pray for you to be free of self deception.

Good luck with that.