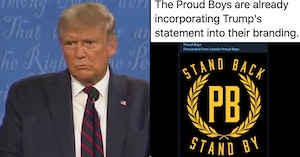 The first presidential debate was a chaotic mess, to the point where very little was clarified regarding the candidates’ actual platforms and stances on the issues that came up. But one moment stood out above the rest: President Trump flat-out refusing to denounce white supremacy.

Trump has long had the support of white supremacists, even getting the endorsement of former KKK leader David Duke in both elections. As Black Lives Matter protests across the country have been violently hijacked by Proud Boys and other white supremacist groups, many of whom display pro-Trump gear and spout pro-Trump rhetoric, it’s more apparent than ever that proud racists still make up a fair amount of the president’s supporters.

Many feel Trump hasn’t done enough to discourage these groups, knowing that he relies on their backing — not to mention the part where Trump himself has been known to spout racist rhetoric on far more than one occasion.

So it wasn’t a curveball when debate moderator Chris Wallace asked the president if he would be willing to condemn “white supremacists and militia groups” right then and there, specifically referring to the violence they’ve provoked in places like Kenosha and Portland as of late.

“Sure I’m willing to do it, but I would say almost everything I see is from the leftwing, not the rightwing,” Trump said, not actually denouncing white supremacists. (And by the way, 93% of BLM protests have been peaceful, so Trump’s claim here seems unsurprisingly disingenuous.)

Giving him another opportunity, both Wallace and Biden prompted Trump yet again to denounce white supremacists and their violence, and he yet again failed to do so.

“Who would you like me to condemn?” Trump asked.

Trump’s multiple failures to condemn white supremacist violence when asked, instead offering a dangerous group of racists the concerning note to “stand by,” while also lying about there not being a problem with rightwing violence when Trump’s own FBI director and the Department of Homeland Security have said differently, prompted outrage online.

Members of the Proud Boys have already adopted Trump’s message to “stand by” as a badge of honor, with The Daily Beast reporting that group leaders are celebrating on far-right social media platforms, reading “Trump’s remarks as permission to ‘f—‘ up the group’s foes.”

Regardless of the outcome of the upcoming election, it’s hard to imagine a scenario in which violence doesn’t follow. If Trump loses, they’ll riot. If he wins, it doesn’t seem likely the white supremacists will continue to “stand by” any longer.