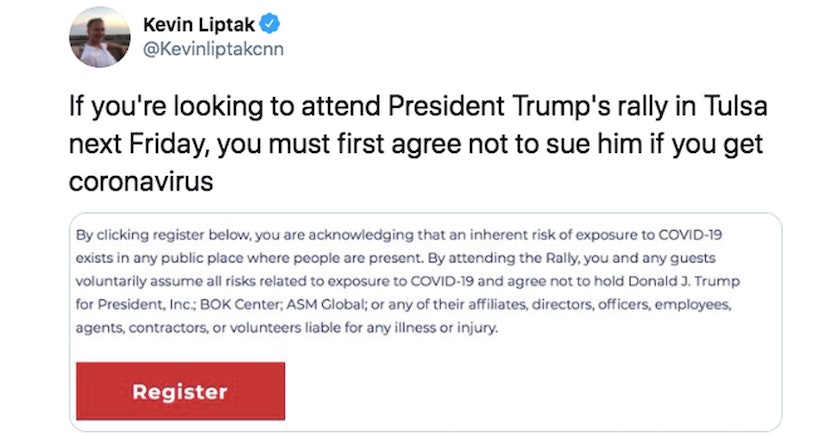 Even though it seems like 2020 has already been ten years long, it was only three months ago that cities across the United States began shutting down to better cope with the first wave of the COVID-19 pandemic sweeping through the country.

But now, despite the number of infections continuing to rise and deaths in the United States crossing 115,000, many places are beginning to open back up, and Americans are encouraged to go back to their lives and operate more or less as normal.

And even as the government is telling us that everything’s fine, that we should go out and reinvigorate the economy, their actions tell a different story.

One of the most telling signs that the government knows the novel coronavirus still poses a huge threat to Americans is the waiver that people are now required to sign if they attend an upcoming rally for President Trump in Oklahoma.

“By clicking register below, you are acknowledge that an inherent risk of exposure to COVID-19 exists in any public place where people are present,” it reads, before requiring attendees to promise not to sue Trump or anyone else involved in the rallies if they become sick.

Trump has repeatedly refused to wear a mask in public, as part of some deeply misguided macho fantasy, and it seems unlikely that any of his rallies will require masks or social distancing of any sort.

The mixed messages this waiver sends when paired with the government’s stance on reopening is enough to make anyone’s head spin.

But folks are not looking forward to seeing how quickly COVID-19 spreads among large groups of people who believe it to be a hoax.

Not only is he hosting a potential hotspot for COVID-19 spread, but the rally is also taking place on Juneteenth, in Tulsa — both the date and place of one of the worst massacres of Black Americans in U.S. history — in the middle of nationwide protests against racism.

There are a lot of Choices with a capital C happening here, and so far, not a single one of them looks good. If only we had a president who did crazy things like take any responsibility for anything going on in the country whatsoever.