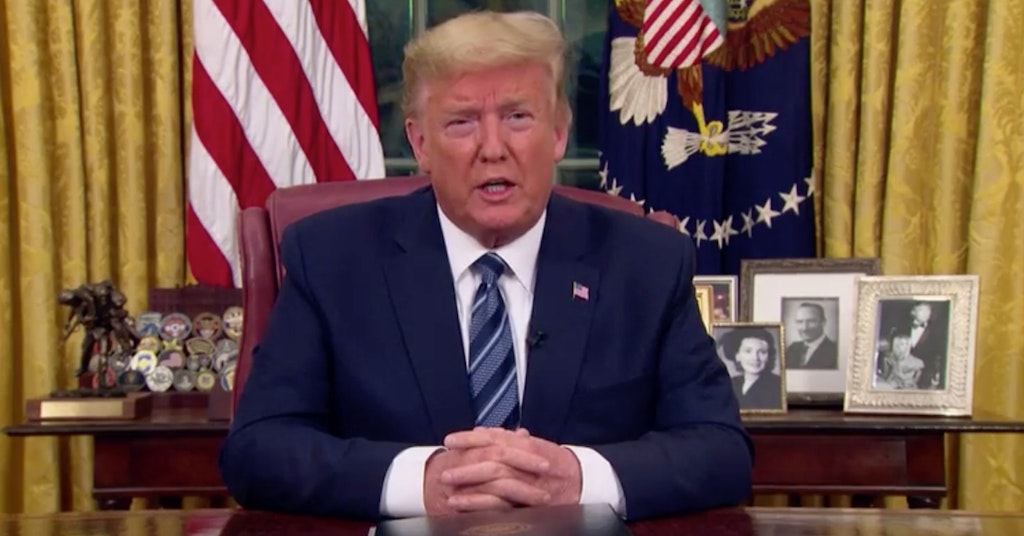 Report: Donald Trump Refusing To Get Tested For Coronavirus Despite Contact With Infected Official

The coronavirus is all anyone is talking about right now, but how people are talking about it varies widely. Those working for the federal government and Donald Trump are alleging that things are under control and there’s nothing to worry about. Anyone who is a scientist and not controlled by the GOP is saying there’s a lot to be worried about, especially in light of how the former group is reacting. Not enough people are being tested to get any sense of how COVID-19 is spreading and a pandemic in the U.S. could quickly mean that hospitals in dense populations will become overwhelmed.

Trump has remained resistant. In fact, he seems to think he is resistant to the virus entirely. The New York Times reports that Trump and Vice President Mike Pence are refusing to be tested for COVID-19, even though they have been in contact with individuals with confirmed cases.

For example, with Fabio Wajngarten, communications aide to the president of Brazil, Jair Bolsonaro. Wajngarten tested positive just a few days after going to Mar-a-Lago with both presidents. Here they are, looking cozy:

This picture was taken last weekend at Mar-a-Lago. The guy in the hat standing next to Trump is Fábio Wajngarten, press secretary for the Brazilian government.

Though there were reports Bolsonaro himself had tested positive for the virus as well, on Friday he said that these reports were false, taking to Twitter to write: “DO NOT BELIEVE IN THE MEDIA FAKE NEWS!”

(ENG)Too much lies and little information. Coronavirus exam done with the team that were with JB in USA have not yet been completed

There are always those people who tell lies in the media and if the story is confirmed they say "I told you!", if not will be just 1 more fake news

The White House is supposedly planning an emergency meeting, but in a statement on Thursday, press secretary Stephanie Grisham said, “Both the president and vice president had almost no interactions with the individual who tested positive and do not require being tested at this time.”

They’re also not taking precautionary measures to limit their exposure to others.

“There is currently no indication to test patients without symptoms, and only people with prolonged close exposure to confirmed positive cases should self-quarantine,” said Grisham. “Exposures from the case are being assessed, which will dictate next steps.”