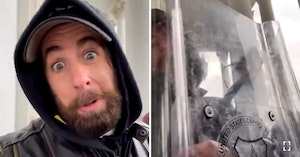 Thanks to the tireless efforts of some activists, videos from the assault on the Capitol on January 6 have been archived en masse so that the rioters can be identified.

Thanks to the rioters themselves, identifying them has been incredibly easy because so few of them were wearing masks and they kept filming themselves admitting to crimes.

Perhaps topping the list of these clowns is a man who took a video of himself with a stolen police shield, admitting that he stole it, and advising future insurrectionists to do the same in the event that they “take over the Capitol.”

“Make sure, if you ever take over the Capitol or any other big place, make sure you bring a shield,” he says. “You can’t get this anywhere except for the cops’ hands.”

That last bit is technically true, but he left out the fact that obtaining those shields is very likely a criminal offense and one that the police are particularly sensitive about.

So far it does not appear that the man in this video has been identified and arrested, but we’re sure it won’t be long before he’s featured in yet another “how it started vs. how it’s going” meme. Hopefully, it doesn’t end in a standoff with this guy using the plastic shield to protect himself from bullets, because he suggests in the beginning of the video that he thinks it’s bulletproof.

“I’m the only one with a shield, I dunno why no one else brought a shield, but I brought one just in case they started shooting,” he says.

This might be a joke but the dude also thought it was a good idea to film himself with stolen police gear in the middle of an insurrection.

Things may get even worse for this young man if he can be connected to the scene at the front doors of the Capitol where cops with those same shields were trying to hold back the massive crowd of Trump supporters. Footage of this part of the insurrection went viral in part due to the close-up view of an officer screaming as he appears to be getting crushed by the door.

In different parts of the footage, rioters can be seen successfully taking one of the plastic shields from the cops and using it against them. If the bearded knucklehead can be tied to any officer injuries, he’s in for a rude awakening.