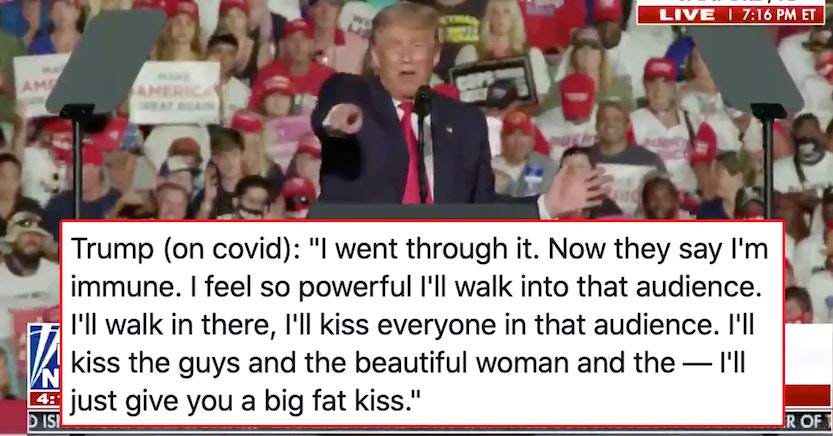 President Donald Trump returned raised eyebrows from critics on Monday after telling supporters in Sanford, Florida that he was going to give all of them—an estimated 7000 “guys and the beautiful women”—a “big fat kiss.”

In his first official rally since being diagnosed with COVID-19 on Oct. 1, the president said he felt “powerful,” falsely claimed he had developed an immunity to the coronavirus, and urged supporters in the battleground state to go out and vote.

“I went through it and now they say I’m immune. I feel so powerful,” Trump said. “I’ll walk in there, I’ll kiss everyone in that audience. I’ll kiss the guys and the beautiful women, just give you a big fat kiss.”

According to Business Insider, though the rally was held outside, “few supporters were photographed wearing masks” and many were packed together, violating social distancing guidelines.

Despite the rising death toll of COVID-19 in the U.S., and against the ongoing advice of Dr. Fauci, the president urged his followers to “get out there.”

The CDC urges those who test positive for COVID-19 to self-isolate for at least 10 days.