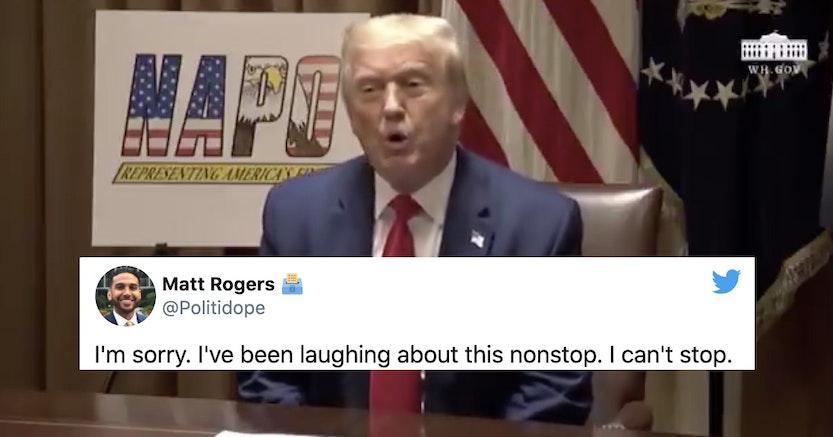 When “soup” starting trending on Twitter, I briefly wondered what it could mean. A new quarantine challenge? Another reference for WAP? God, the possibilities were endless.

So why is “soup” trending alongside President Trump? Well, quite simply, a clip of him speaking at NAPO on July started making the rounds. And in this clip, Trump speaks of the danger of “anarchists” throwing bags of soup at the police. Twitter folks are hashtagging their responses “SoupNazi” in a reference to Seinfeld.

“In cities across the nation, we’ve also seen police officers assaulted with bricks, rocks, bats, Molotov cocktails, frozen bottles of water. Somebody said last night, one of the protesters — I saw it — he said, ‘It’s only water. How can water hurt you?’ Yeah, they don’t say it’s frozen, in a bottle the size of a football. And they throw it at the police. It’s unbelievable. ‘It’s water,'” Trump said.

“And then they have cans of soup. Soup. And they throw the cans of soup. That’s better than a brick because you can’t throw a brick; it’s too heavy. But a can of soup, you can really put some power into that, right?”

“And then, when they get caught, they say, ‘No, this is soup for my family.’ They’re so innocent. ‘This is soup for my family.’ It’s incredible. And you have people coming over with bags of soup — big bags of soup. And they lay it on the ground, and the anarchists take it and they start throwing it at our cops, at our police. And if it hits you, that’s worse than a brick because that’s got force. It’s the perfect size. It’s, like, made perfect.”

“And when they get caught, they say, ‘No, this is just soup for my family.’ And then the media says, ‘This is just soup. These people are very, very innocent. They’re innocent people. These are just protesters. Isn’t it wonderful to allow protesting?’ No, there’s — and, by the way, the media knows it better than we do. They know what’s going on. I don’t know what’s wrong with them. They’re doing our country a tremendous disservice — I’ll say that.”

So, weaponized bags of soup and snide comments about our right as Americans to protest. Just another day.

On June 6th, the Portland Police Department posted a picture on Twitter of some of the objects that were thrown at officers, which included a can of Garbanzo beans. Maybe Trump got that confused with a bag of soup? The whole thing is bizarre.

I think the real question is: what soup are you going to make tonight?