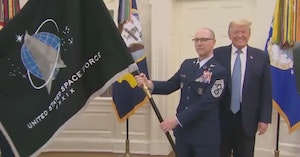 In the latest bout of Trumpian weirdness in a time when he definitely has better things to focus on, Donald Trump unveiled the official flag for his favorite new military branch, the “Space Force.” It includes the recently-designed logo on a black background with a white fringe on a long pole to make it perfect for dry-humping by the president later.

But that’s not the weird part.

"I call it the super duper missile"

Trump explaining how he describes a missile being developed by the Space Force that is travels at a speed 17x faster than current missiles. pic.twitter.com/bFmJj2slIJ

Trump went ahead and revealed the development of a hypersonic nuclear missile meant to travel at speeds 17 times faster than our standard missiles, because apparently we can’t kill civilians fast enough.

He calls it the “super-duper missile.”

“I call it the super-duper missile,” he said to the press, “and I heard the other night 17 times faster than what they have right now, and you take the fastest missile we have right now.”

Trump went on to brag that the U.S. is currently “building right now incredible military equipment” when we’re still dealing with widespread medical equipment shortages as well as massive unemployment and the threat of mass evictions that could leave millions more Americans homeless.

Meanwhile, the Netflix series Space Force starring Steve Carell and John Malkovich is set to premiere next month. Maybe they can borrow some of the jokes going around Twitter right now.

What Trump is doing is very dangerous. The Super Duper Missile range was scaled back to Far Away from Very Far Away, and payload limited to Big Noisy Bang instead of the heftier Gigundous Kaboom, all according to the Strategic Water Rockets and Splodey Stuff Treaty of 19-Eleventy

This was pretty much Trump today as he announced the “Super Duper Missile” pic.twitter.com/f84qZra8EA

The “Super Duper” Missile? Is Wile E. Coyote your consultant? If you mishandle this like the pandemic the results will be the same. President Feckless. ⁦@realDonaldTrump⁩ pic.twitter.com/IDGxGybKnM

The Trump plan to destroy coronavirus:

Well, ya know what they say about Adderall. It makes smart people smarter, and stupid people brainstorm about adding a super duper space missile to our arsenal alongside the interplanetary pooper scooper stored in Uranus. A 1st grader snorting pixie sticks could POTUS better.

Billions spent in research & development, what shall we call it?

You know who else called it the ‘super duper missile’? None of his wives, no matter how many times he asked them to. @realDonaldTrump https://t.co/FYwGZKzxGW

There has been a lot to intake lately but I don't think I come back from "super duper missile." I think this is the one that breaks me. https://t.co/19Y1d8GzMQ

Just another normal one in America.