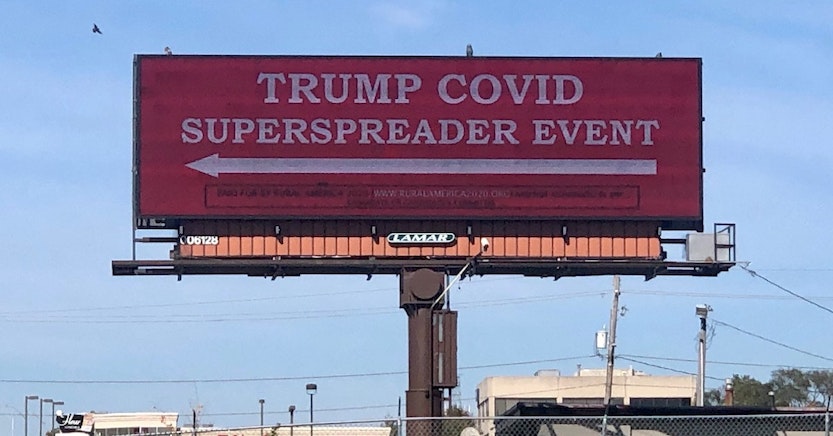 An unusual billboard advertisement popped up outside of the Des Moines International Airport in Iowa on Tuesday directing viewers to a nearby Donald Trump campaign rally, or perhaps more accurately, warning them to stay away. The billboard featured a large white arrow pointing to the rally location with the words “TRUMP COVID SUPERSPREADER EVENT.”

Credit goes to agricultural advocacy group Rural America 2020, which announced its action via tweet and said that the ad would remain up through the campaign event on Wednesday.

In a press release about the billboard, Iowa Rural America 2020 Steering Committee member Chris Henning expressed concern about the possibility that Trump, recently released from Walter Reed Medical Center after a bout with COVID-19, could still be contagious.

“We should all be worried about a President who was in the hospital with COVID last week and who now wants to pack thousands of Iowans into an airport hangar,” said Henning. “This is the height of irresponsibility. We saw what happened in the Rose Garden. Why should the President be allowed to bring that kind of superspreader behavior into Iowa, particularly when our cases are rising?”

COVID-19 cases are on the rise in Iowa, much like they are in the rest of the midwest as the virus has migrated from densely-packed cities out into more suburban and rural areas. Des Moines Mayor Frank Cownie expressed concern about the possibility of the upcoming rally becoming a super-spreader event, urging attendees to wear masks and practice social distancing, which they almost certainly won’t.

“Absolutely I’m worried about the spread. We don’t want a super-spread event here in Des Moines,” Cownie told the Des Moines Register on Sunday. “We urge everyone who would attend this event to wear a mask and social distance as best they can, and to stay safe and healthy.”

Although the billboard seems unlikely to deter Trump supporters from attending the rally, which will take place in an airport hangar, his critics are thoroughly enjoying the top-notch troll.