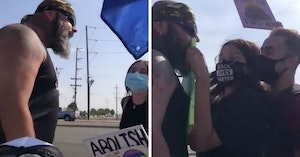 A Reddit video showing Trump supporters harassing Black Lives Matter supporters in Bakersfield, California has gone viral. The video, which was recorded over the weekend, begins with a Trump-supporter dancing near a Black Lives Matter merchandise table with her dog. A BLM supporter reached to pet the dog, and an argument began.

“Don’t you even touch that dog,” a woman with a “blue lives matter” flag says to the BLM supporter.

Then, a pro-Trump thug approaches another BLM supporter and says he’s going to “kick [him] in his f***ing forehead.” He gets uncomfortably close to the BLM supporters, forcing them to take steps back. He then pretends to act a big, strong man and throws a few air punches like he’s a demented cartoon character from the 1950s.

Instead of letting everything be, the harassment continues as another woman in Trump gear approaches the person taking video footage and asks, “you wanna be next?”

The situation ended when the Trump thug flipped over the BLM table. Someone needs anger management, ASAP! Luckily, no one was reported to be injured. According to KGET, the police were summoned to the scene, but no arrests were made.