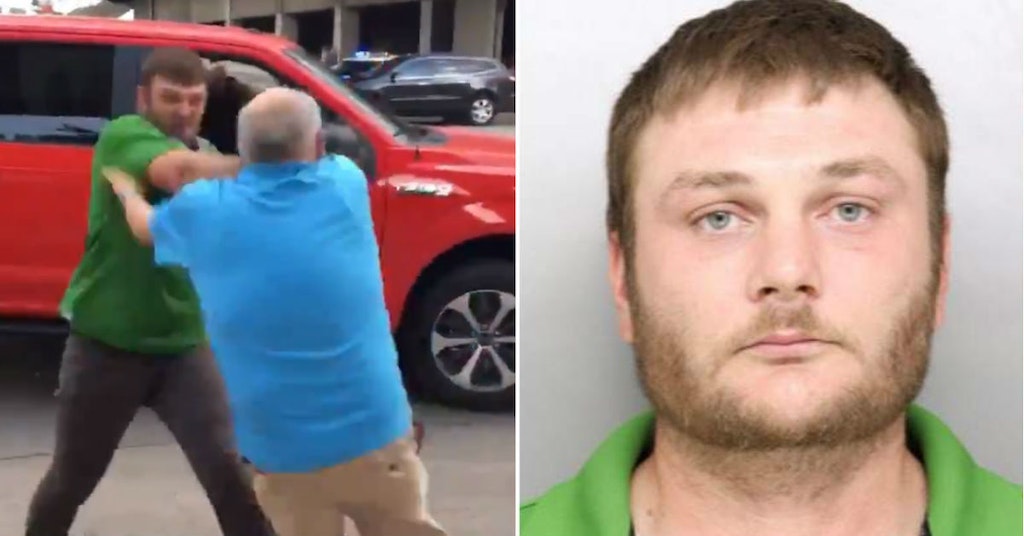 A Trump supporter was caught on video brutally assaulting a 61-year-old postal worker after pulling up in front of an anti-Trump protest in a red pickup truck (of course).

Multiple videos have been posted of the 29-year-old man getting out of the car and immediately approaching the gray-haired protester with his fists up, then punching him directly in the face and landing at least two more hits before another protester is able to push him back.

Trump supporter attacks old man & beats him mercilessly. Good thing he didn't pour a milkshake on him like those violent Antifa thugs!pic.twitter.com/D4daE8pYpL

On the bright side, the Trump supporter is then immediately arrested by police. In a longer video, it appears that the driver of the truck is also arrested, and as the two of them are led away, the protesters chant “lock him up” in reference to the common chant that Trump supporters like to take up against Hillary Clinton.

According to local news outlet WCPO Cincinnati, the assaulter was Dallas Frazier of Georgetown, Kentucky, and the victim is Mike Alter. The anti-Trump protest in front of the arena where a Trump campaign rally was to be held had been peaceful until Frazier arrived and started shouting at the protesters.

Here’s the video (with swearing, just FYI) from Scott Fantozzi, who was also part of the anti-Trump protest. Cincinnati police told me this was the only rally-related fight or arrest they were aware of. pic.twitter.com/tFqtCm8b98

“These guys pulled up in the pickup truck, everyone was yelling back and forth at them,” Alter said to WCPO.

Though it looks like Alter was inviting Frazier to fight, the 61-year-old says he didn’t expect the much younger man to actually throw a punch. “I was more questioning him … like, really you want to fight?”

This seems reasonable, considering the fact that most people have a set of morals that include “don’t assault people who look like they could be grandparents.”

“I didn’t go down, for what that’s worth,” said Alter. Well done. Frazier is being charged with assault and was issued a $10,000 bond.

Trump supporters have become known for their willingness to violently assault people, particularly after Trump repeatedly encouraged them to do so at his rallies prior to the 2016 election, even promising to cover their legal fees if they’re arrested for the crime. Meanwhile, conservatives freak out when actual fascists get hit with a milkshake.

The various double standards at work here are not lost on people.

Does anyone know why the perp wasn’t tackled to the ground, put in a stranglehold, knelt on by three cops and punched in the face?

And the scary part is the dude is honestly taken back as cops approach to arrest him. He’s stunned, he honestly thought he had the right to do just what he did

I’m curious:
Why didn’t they grab his throat?

Why didn’t they throw him on the ground and sit on his neck?

He displayed aggression and initiated violence.

Don’t answer, we know why.

is that overweight white guy (the one who threw the punches) one of the violent ANTIFA folks the right is always talking about?

It’s amazing he wasn’t thrown to the ground violently while a gang of 4-6 officers put their entire body weight on him, punching him into submission. Police don’t need any training, they know EXACTLY how to respond when the appropriate criteria is met.

His parents must be so proud. Throwing fists at a 61 year old. So brave of him.

Wow. This young man couldn’t even knock down or knock out an old man. ????

Wow. This young man couldn’t even knock down or knock out an old man. ????

The young aggressor reminds me of “the phalanx”, a violent group of civilian enforcers during the often forgotten Franco’s fascist regime in Spain.#Trump

Takes a lot of guts to fight a 61 year old man. I’m sure he beats his wife as well.

Even being twice the age of the older guy, and landed at least three good blows, he could not knock the older guy out. Weak just like this president. trump supporters always seem to target weaker elderly people.

I’m sure there were no younger or healthier protesters he could have gone after, what a real man hitting a 61 year old.

Couldn’t even put the old man down!!Got locked and old man not even scathed!