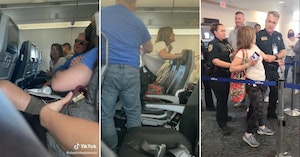 An irate couple was removed from a Florida JetBlue flight over the weekend after some kind of argument in which they reportedly dropped racist and homophobic slurs resulted in the staff deciding they would be better off without those two in the air. The pair were then recorded having a tantrum and refusing to leave their seats, throwing around a clear homophobic slur, then trying to claim they were being deplaned because they were Trump supporters rather than because of the hateful language.

They also had a lot to say about freedom of speech, which has never protected customers from being denied a service because they were being terrible and bothering all of the other customers.

“Free speech is dead!” the woman declares as a JetBlue worker explains that she will be leaving the plane, whether voluntarily or not. She further acknowledges that her refusal means “you’re gonna have to take everyone off” the flight and re-board, wasting everybody’s time, but still can’t seem to understand why no one on the plane likes her.

“You guys see what’s happening in America?” she asks the passengers across the aisle. “You didn’t like what he said, and now we’re getting kicked off a plane, and all of you all are gonna have to wait. This is f—ing outrageous.”

It is indeed outrageous that everyone’s flight was delayed because two people were being massive jerks, yes. Removing unruly passengers is also not at all a new policy at any airline — it’s simply been used more often in the past couple of years, but not because the rules have become stricter. It’s because the passengers have gotten worse.

She goes on to declare Elon Musk “king,” declaring the people across the aisle to be “mask people,” says she’s not getting the vaccine (after mentioning for no reason that she “used to dance on Broadway”), and laughs and praises her husband for spewing a homophobic slur at everyone. Her partner soon moves on to threatening to physically assault people.

Perhaps the only thing that makes the video watchable is the poor guy trapped next to the window on the other side of them who can only face-palm and laugh as she declares she’s going to sue the other passengers, demanding their names.

Eventually, the pilot has to announce that everyone has to get off the plane because of this couple as everyone groans and yells and the woman tries to yell over it all that she and her homophobic partner didn’t do anything wrong. Then she goes for the political prisoner angle.

“We gotta get off the plane because we’re Trump supporters,” she said. “Seriously, I really think that’s what it is.”

As the three-minute video went viral, others surfaced showing the couple being escorted from the plane and back into the airport, where the woman kept trying to stop and yell at all the people booing her as the police tried to keep her moving. Annoyed passengers then cheered and laughed as they took her away.

Sights like this have been increasingly common since airlines began requiring mask use on all flights early in the pandemic. Recently, an unqualified Trump-appointed federal judge struck down the national mandate requiring these policies, resulting in people somehow managing to be even more insufferable about mask usage as some of us try to avoid the dangerous illness.