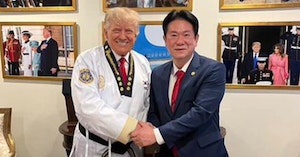 Honorary titles, degrees, and other such distinctions are generally reserved for people who have succeeded in the corresponding field in some notable way. But the rules have never applied for Donald Trump, and that seems to be trickling down to even the most mundane things.

The former president received an honorary ninth-degree black belt in taekwondo last week, the highest achievement a person can receive in this particular form of martial arts.

The honor was bestowed upon Trump by Lee Dong Seop, president of Kukkiwon. Photos show the two posing together at Mar-a-Lago.

As one might guess, Trump has never actually practiced taekwondo or done anything suggesting he is deserving of a black belt. However, he is not the first world leader to receive such an unearned honor — his very own personal hero Vladimir Putin received the same honorary title in 2013.

The idea that Trump is a black belt — even if purely in title and not in practice — fits well with the insane image his supporters have in their minds of him as a fierce warrior. It will be a long time before any of us living through the Trump years can scrub the images of his face photoshopped onto Sylvester Stallone as Rocky’s body out of our brains.

But everyone else was predictably lost as to why Trump would receive an honorary anything in any physical sport.

And seeing Trump receive something that many people work hard to achieve over many years, while not the least bit surprising, was still frustrating.

The Kukkimon honor even prompted World Taekwondo to issue a statement of clarification that they had nothing to do with Trump’s fancy new belt.

“As such, we are focused on our mission to develop and grow Taekwondo as a sport throughout the world from grassroots to elite level, and to contribute to humanitarian and social development through Taekwondo.”

In other words, they have better things to do than make a mockery of their sport by handing out a black belt to someone like Trump.