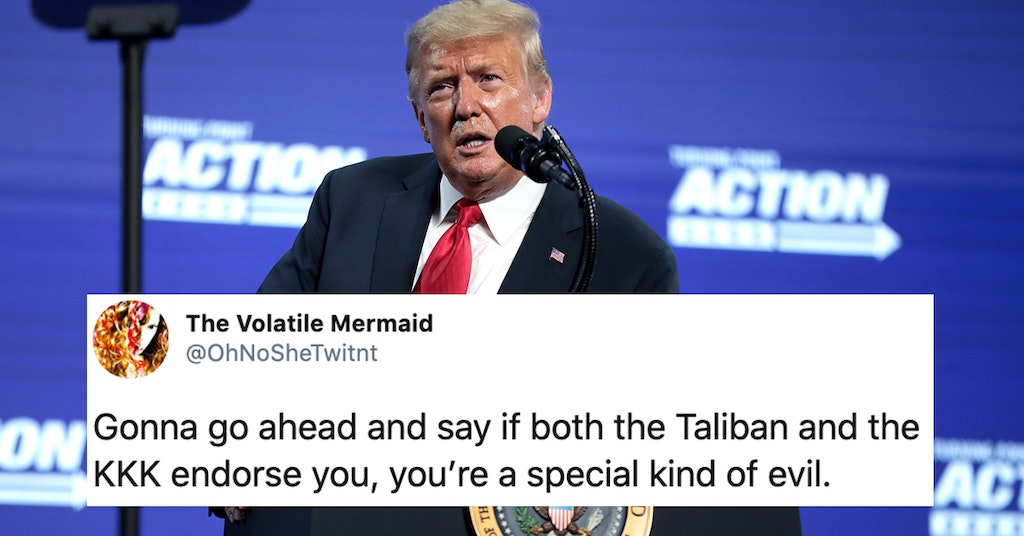 The Taliban Endorses Trump For President


When President Trump was endorsed by former KKK leader David Duke, it seemed as though that would be the rock bottom of endorsements.

But then came the Taliban.

Spokesman Zabihullah Mujahid told CBS News that the group was rooting for Trump to become president again, spouting off all kinds of nonsense about Trump having “proved himself” and accomplishing “all the major promises he has made to American people.”

“We think the majority of the American population is tired of instability, economic feailures and politicians’ lies and will trust again on Trump because Trump is decisive, could control the situation inside the country,” he said.

The crux of the Taliban’s interest in Trump staying president seems to be his interest in withdrawing troops from Afghanistan. Trump brokered a deal with the militant group earlier this year, committing to whittling down the United States’ presence in the country as certain conditions were met, including the Taliban cutting ties with terrorist groups such as al-Qaeda — something that has not happened yet.

“We hope he will win the election and wind up U.S. military presence in Afghanistan,” another leader told CBS.

The U.S. had removed about a quarter of the troops stationed in Afghanistan by the end of the summer, resulting in an increase in violent attacks as the Taliban fortifies its presence there, according to The Washington Post.

And while many Americans ultimately support lessening our interference in other countries, there is apparently concern that withdrawing from Afghanistan completely could “create a power vacuum, allowing similar groups to use Afghan territory to carry out terrorism abroad.”

So it isn’t surprising that members of the Taliban are speaking positively of Trump, while acting as if they are simply concerned for the U.S. and its people.

“When there is no interference by U.S. in other countries, we believe they are facing fewer threats compared to their aggressive position,” Mujahid said. “Trump has a concrete policy in this regard and it is better for America.”

One would think that the endorsement of the Taliban would have caused more of an outcry among Republicans, but it has apparently failed to do so thus far.

The Trump campaign, doing the bare minimum, did at least reject the endorsement. Kind of.

“The Taliban should know that the president will always protect American interests by any means necessary,” spokesman Tim Murtaugh said.

But one would think the fact that the Taliban believes Trump’s policy will better suit their goals would be of more concern to the American people.

Mujahid claimed on Sunday that CBS somehow “interpreted and published [his] words incorrectly,” though the clarification seems to be simply that they prefer Trump stay in the White House, rather than that they are endorsing him outright.