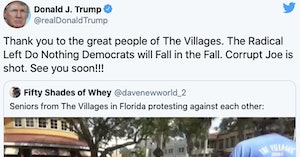 President Trump on Sunday morning tweeted “Thank you to the great people of The Villages” in response to a video in which a man driving by in a golf cart is seen giving a thumbs up and shouting “white power” while protestors yell “F—k Trump.” The golf cart bears “Trump 2020” and “America First” signs.

The video was originally posted by Twitter handle Fifty Shades of Whey, who noted in their caption that the seniors in the Florida retirement community were “protesting against each other.”

Seniors from The Villages in Florida protesting against each other: pic.twitter.com/Q3GRJCTjEW

The president later deleted his retweet of the video, the caption of which read in full: “Thank you to the great people of The Villages. The Radical Left Do Nothing Democrats will Fall in the Fall. Corrupt Joe [Biden] is shot. See you soon!!!” 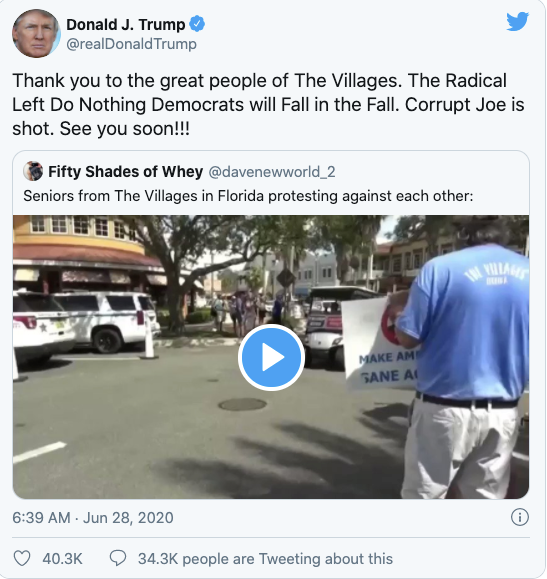 According to CNN, US Secretary of Health and Human Services Alex Azar responded to the video when asked by Jake Tapper on “State of the Union” on Sunday.

“I’ve not seen that video or that tweet, but obviously neither the President, his administration nor I would do anything to be supportive of white supremacy or anything that would support discrimination of any kind,” said Azar.

When he was asked if the tweet was a mistake by President Trump, Azar declined to comment, but said: “Obviously the President and I and his whole administration would stand against any acts of white supremacy.”

According to the Anti-Defamation League, “white power” is a white supremacist slogan.