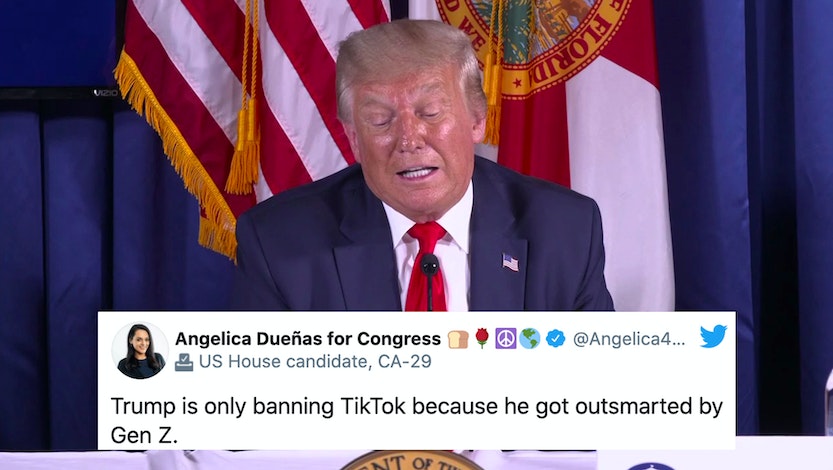 There’s so much going on in the U.S. right now: protests against racism and violent policing, a virus that has killed over 150,000 people and shows few signs of slowing down, an upcoming election, and the imminent end of humanity due to climate destruction. So, of course Donald Trump is focusing on TikTok, a social media platform that he can’t seem to take over.

The Daily Beast reports that Trump told reporters on Air Force One late on Friday that he planing to ban the Chinese social media video app from the United States. It doesn’t seem like this is technically possible, but he seems to believe that with an executive order on his desk, there’s no such thing as “no” for the president.

“As far as TikTok is concerned, we’re banning them from the United States,” he said. “Well, I have that authority. I can do it with an executive order or that.”

While it is wise to keep an eye on the app, which has been criticized for its data privacy violations, or the suspicion of such, Trump seems to not like TikTok for the same reason he doesn’t like anything: it embarrassed him. Although it may not be entirely true, it was widely speculated that teens ruined his Tulsa, Oklahoma rally by booking tickets to leave empty seats, and a lot of the organizing was done on TikTok.

Trump is only banning TikTok because he got outsmarted by Gen Z.

Trump’s doing more to limit TikTok than he’s done to limit the spread of COVID.

The Washington Post reached out to TikTok, whose spokesperson Hilary McQuaide, declined to comment. She did say that they are “confident in the long-term success of TikTok,” which seems to imply that Trump’s little threats aren’t intimidating China in the least.

On Twitter, everyone seems to think that this move will activate the teens who just turned legal age to vote out to the polls:

50% of @tiktok_us users are 18-34. That’s 35 million voting age folk Trump just pissed off. #PresidentSnowflake banning TT cause he’s mad about Tik Tok teens & Tulsa. If it was “national security” he wouldnt stop Microsoft from buying it

Kick his ass, tik tokers. Vote him out.

BREAKING: Donald Trump has just been tackled to the floor by a tiktok influencer pic.twitter.com/lAJ5AcBONj

TikTokers on their way to polls in November , after Trump banned TikTok: #tiktokban #TikTok pic.twitter.com/6PQjSCruGx

tiktok users arriving to the white house to beat up trump pic.twitter.com/KvQGUbzRtR

I think we should give the youth more credit than that. TikTok getting canceled might piss them off, but if they’ve been paying attention they’re more than ready to get rid of Trump even without this final straw.