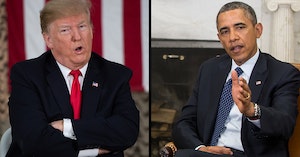 On Friday, President Donald Trump ordered an airstrike that killed top General Qassem Soleimani of Iran near Baghdad International Airport. Soleimani was the head of Iran’s elite Quds Force, and his assassination was an extreme escalation in rising tensions between Iran and the U.S., which has been an issue ever since Trump took office and withdrew a nuclear deal struck in 2015 and imposed sanctions on the country. The HuffPost reports that Iran’s supreme leader Ayatollah Ali Khamenei has already promised “harsh retaliation” in response to Soleimani’s death.

And Donald Trump tweeted this right after destabilizing the Middle East and imperiling thousands of Americans abroad as well as citizens of Iran. A low-resolution jpeg of an American flag:

The defense department has claimed the airstrike was a response to violent protests around the U.S. Embassy in Baghdad last week, which they say were orchestrated by Soleimani. The attack was not approved by Congress, however, and there is some question as to whether or not Trump had the legal right to murder Soleimani as a response to the Embassy door getting battered down. The Pentagon has not offered any evidence that there were more attacks coming from Iran that would justify the president taking action without a vote from Congress.

Many are accusing Trump of essentially starting a war in the Middle East as a distraction from the impeachment hearings taking place against him and to bolster his position right before the next presidential election. That makes a lot of sense, especially in view of some old tweets that have been circulating.

In 2011 and 2012, Trump himself predicted that President Barack Obama would start a war with Iran to get reelected.

In order to get elected, @BarackObama will start a war with Iran.

Now that Obama’s poll numbers are in tailspin – watch for him to launch a strike in Libya or Iran. He is desperate.

Polls are starting to look really bad for Obama. Looks like he'll have to start a war or major conflict to win. Don't put it past him!

Don't let Obama play the Iran card in order to start a war in order to get elected–be careful Republicans!

It continued into Obama’s second term, though that was when he struck a deal with Iran to prevent war:

I predict that President Obama will at some point attack Iran in order to save face!

He also did an about-face at some point, claiming Obama was friends with Iran, which reads like a sarcastic insult, too:

Iran has never had a better friend than Obama.

It’s become a bit of a trope to say “there’s always a tweet” about everything Trump says and does, but in this case, it’s all too accurate. The man wants a distraction, he wants to save face, and he wants to get re-elected—if he doesn’t get impeached.

"There's Always a Tweet" feels flippant on a night like this. But given the president's mindset in this old tweet, it's hard not to wonder about his mindset in carrying out a drone strike to kill an Iranian general 48 hours into the 2020 election year. https://t.co/fFVtg4AhmP

Trump does a lot of terrible things, but throwing us all into another war so he can tweet from the White House toilet for another four years is worse than anyone imagined. Except him. He imagined it nine years ago.