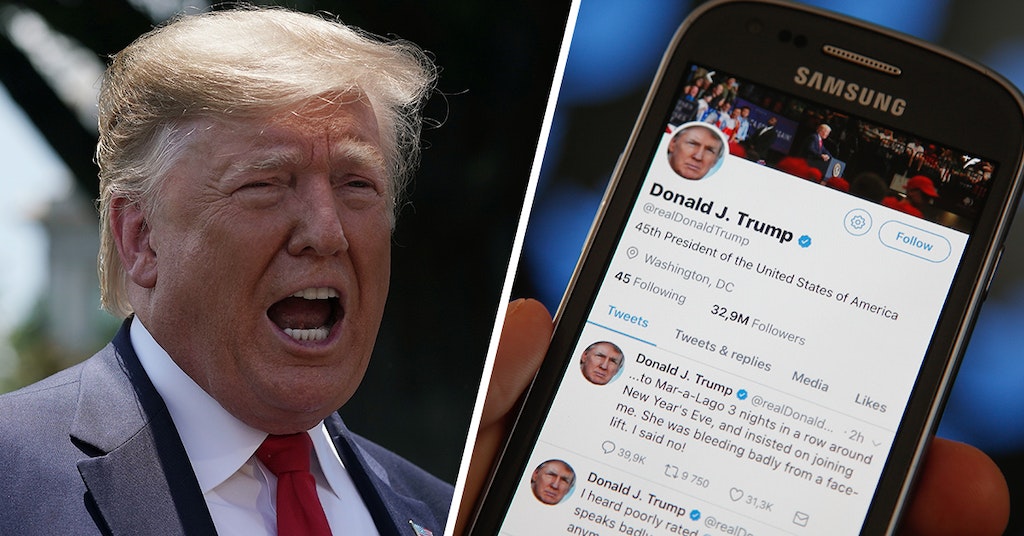 After years of criticism over allowing tweets from Donald Trump and other politicians that clearly violate Twitter’s rules, the company has announced a new policy in which they will put rule-breaking tweets behind a warning notice. The notice will alert Twitter users that the tweet does in fact break the rules, but it’s been allowed to remain because it’s in “the public’s interest” for it to stay up.

Twitter is introducing a label to place over tweets from world leaders that are found to be in violation of its rules around abuse, harassment, and violent threats. Those tweets will still remain up, but they'll be placed behind a notice. https://t.co/b9KhKgpmFd

A Twitter spokesperson claimed that the new policy was not inspired by any specific world leader, but we all know that’s about as honest as anything Trump has to say about Muslim people.

The new policy will only apply to “government officials or candidates for public office” who have over 100,000 followers and will not be applied retroactively. It’s good to know exactly how important and popular you have to be in order to be exempt from the rules everyone else has to follow.

“By nature of their positions these leaders have outsized influence and sometimes say things that could be considered controversial or invite debate and discussion,” reads the Twitter blog post on the policy. “A critical function of our service is providing a place where people can openly and publicly respond to their leaders and hold them accountable.”

Sometimes, we decide that it may be in the public’s interest for certain Tweets to remain on Twitter, even if they would otherwise break our rules. We're going to start using a new notice to make it clear when we make these decisions. Read more:https://t.co/XqlJ9KHgir

Thanks so much, Twitter, for allowing us to cover our faces and groan audibly in the middle of the office when Trump tweets that he’s going to obliterate entire nations.

Tweets flagged with this warning will not be boosted by Twitter’s algorithm and will not show up on safe search, live events pages, recommended tweet notifications, the notifications tab, the “explore” page, or on your Twitter feed if you have “Top Tweets” selected. The company predicts that most people will not see this warning often, but we’ll see how often it shows up on Trump’s tweets.

Twitter users are not too satisfied with this new policy and are already predicting issues that could crop up.

Sigh. By tomorrow I bet F*x, Breitb*rt, and Inf*W*rs will have Trump’s followers seeing that label as a sign of martyrdom. It’ll be a plus for them, not a minus.

These tweets should also not be re-twittable.

Cowardly decision: Oh look, we’re solving a problem in theory but our actions show we’re not. Those sorts of tweets should be removed and the accounts should be suspended, as sometimes happens to anybody else on the site.

Why not just ban @realDonaldTrump the private citizen, and force trump to post as @POTUS ?

So it will point out to others what the president is allowed to get away with that others get banned for? Cool ????

Companies trying to put themselves out of business for hate of any kind is just stupid.
Twitter, this is the ultimate stupid. Just stop being biased in your preserving rights and you wont need to pretend you are being fair.

“We have rules, but our accountants override us on enforcing them equally”

Ah yes. Wouldn’t want to suspend our biggest moneymaker now would we

And they’re not wrong about conservatives declaring this an assault on conservatism.

More suppressing the first amendment because of political bias! Twitter needs to be hauled into the Senate. Democrats are ruling Social media.

Others have suggestions for how the policy could be improved.

They should call this new feature “Figleaf”

As long as the label obscures 98% of the text, I’m good with this.

Why not just ban @realDonaldTrump the private citizen, and force trump to post as @POTUS ?

I can save you some time.
Just replace trump’s bio with the label.

Crazy thought: apply your rules universally, without special exceptions, without playing God about what’s in the “Public interest.”