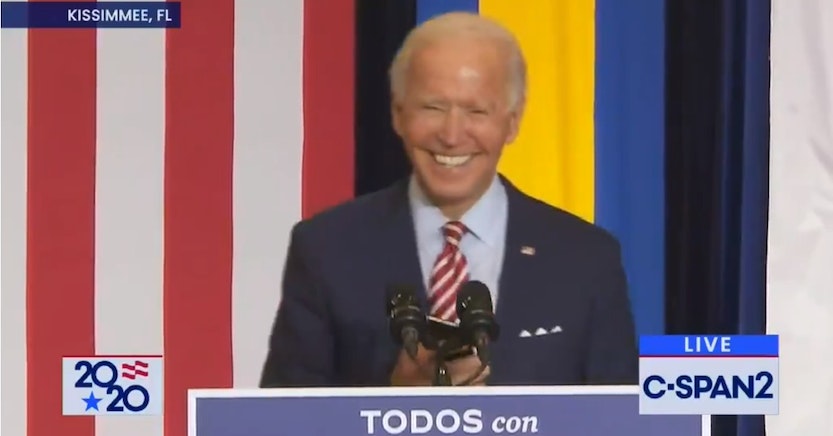 Donald Trump has now twice retweeted a video of the moment that Joe Biden played “Despacito” on his cell phone during a campaign rally, altered to appear that he played the infamous song “F*** Tha Police” by NWA. The video was originally uploaded by the Twitter account for The United Spot, a right-wing YouTube channel full of face-swapped “comedy” videos mocking Democrats.

Trump first shared the altered Joe Biden moment with a comment that seemed to take it seriously.

Twitter has since added a “manipulated media” disclaimer to both of Trump’s retweets, though many Trump critics are disappointed that it hasn’t been removed altogether. The video will likely feed into the idea that Joe Biden wants to defund and/or abolish the police, which he has unequivocally state is not true. Biden has stated that he supports additional funding for police departments, not less.

Not long after, Trump shared another video, this time one that is very clearly altered to show Joe Biden talking about his position on climate change as opposed to Trump’s with individuals in black and helmets marked with the antifa flags starting fires with flamethrowers. Another then comes out with a leaf blower to feed the flames, possibly in reference to the “leaf blower dads” who used these devices in Portland to disperse tear gas deployed at protesters.

Trump did not comment on this one, but hopefully even he and his fans know that this is fake. Twitter, however, has not taken action to label this “manipulated media” or anything else.

Right-wing media is calling these videos “memes,” but the left isn’t so sure that Trump understands that they’re fake. At the very least, they’re not amused.