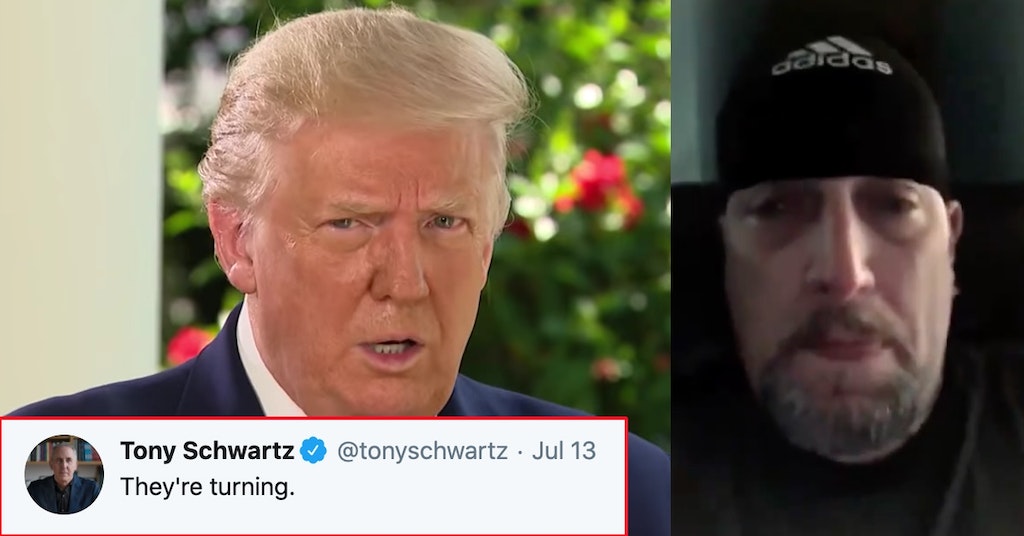 President Trump’s core fanbase may still be dedicated to him in the cult-like fashion they have since the start of his campaign, but more and more Republican voters are peeling off as they see how poorly he has handled the coronavirus outbreak, while insisting on placing blame everywhere else.

A video made by a man named Jeffrey Farmer from Massachusetts has gone viral after he explained why he will be voting for Joe Biden despite supporting Trump back in 2016.

His comments and concerns are nothing new for anyone who has been paying attention, focusing largely on Trump’s propensity to cast himself as the victim during his endless and incoherent Twitter rants, as well as the president’s current plan to send children back to school in the fall despite our COVID-19 numbers constantly rising.

“He’s like a Tasmanian devil. He just throws bombs everywhere. People can’t even keep up with the stuff that he’s saying now,” Jeffrey says. “And putting my children at frickin’ risk, going to school. The teachers, putting them at risk. I want them to go to school. I want the economy to be great and everything. We all want that.”

Those are probably the nicest things Jeffrey says about Trump over the course of the video, also throwing out gems such as:

“This guy couldn’t lead frickin his way out of a frickin wet paper bag. I’m voting for Joe Biden.”

“You are a goddamn sorry excuse for a frickin’ human being. Please do not become President again.”

And finishing the whole thing up with a middle finger held high alongside a scathing farewell:

“Shut the f—k up for once. For once. Why don’t you admit you’re f—king wrong for once. And why don’t you f—ing show some kind of f—king empathy towards somebody other than yourself?”

With so many people focused on getting Trump out of office in the fall, seeing Republican voters switch sides is heartening.

But it’s also frustrating that it’s taken this long for people to see what everyone started warning about back in 2016.

Jeffrey also mentioned that he voted for Trump because he couldn’t stand Hillary Clinton, a refrain many are tired of hearing without anything to back it up other than, in a lot of cases, pure misogyny.

As we truly being plodding on towards November, it will be interesting to see how many more videos like Jeffrey’s begin to circulate online. If Trump continues handling the COVID-19 crisis the way he has been…probably a lot of them.