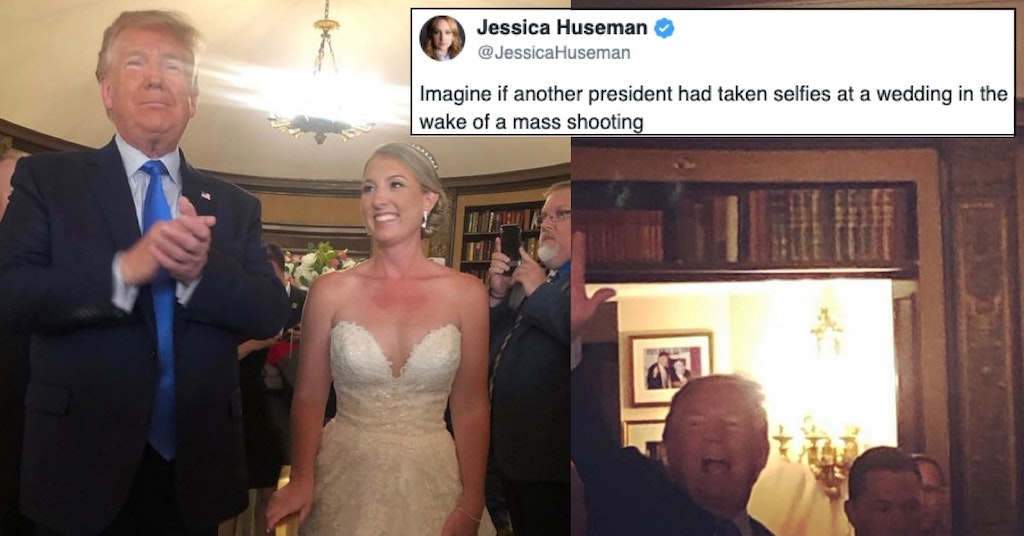 Donald Trump has a habit of dropping in on weddings that get held by MAGA-heads in his establishments. It’s a way of getting his favorite thing: attention from rubes. It also means he can charge more for events at his golf courses and resorts, because his bonehead supporters think they’re paying a guaranteed appearance fee.

In general, this is one of the more harmless things the president gets up to, but a few people have noticed the callousness of a recent wedding surprise visit.

CNN reporter Kevin Liptak tweeted pics of Trump at a wedding at Bedminster, his golf club in New Jersey, on Sunday. The wedding took place Saturday night. Saturday night was just hours after a 21-year-old man murdered 20 people in a Walmart in El Paso, Texas. It was hours before a second mass shooting in Dayton, Ohio, where nine people were killed. But here’s Trump, celebrating:

Trump stopped by another wedding at Bedminster last night pic.twitter.com/38IEhTouFk

Since it was clipped from original Tweet: This picture was posted Saturday, 8/3/2019 at 8:30 PM ET. It confirms that President Trump was doing personal business, making money off of the presidency, by visiting weddings on his property, on the night of the El Paso shooting. pic.twitter.com/806asOjV1Q

The New York Post reports the couple was identified as Alyssa and Alex, and that Melania Trump also made an appearance with her husband.

“The bride and groom and their guests even got to meet the President and First Lady as they were having dinner on their property!” the a wedding photographer confirmed to reporters on Sunday.

You can see Trump standing with the bride in one image:

And in another he seems to be waving and shouting at the crowd:

One photo showed that even Barron Trump was present:

America is no stranger to mass shootings, and many presidents have had to navigate their responsibilities as the leader of the country after civilians have been gunned down. Many were quick to point out that no former commander-in-chief would dream of being caught out celebrating hours after one of these tragedies. Many are disgusted with his insensitivity, though it’s doubtful anyone is particularly surprised.

Imagine if another president had taken selfies at a wedding in the wake of a mass shooting https://t.co/yeklv824tT

Literally between El Paso and Dayton, the President was at his golf club posing for pictures so he can charge more for events at his own hotels. He doesn’t give a shit about any of us. https://t.co/pnVDMje1mg

As usual the President spent the hours after a shooting mourning the loss of innocent lives and somberly reflecting on his role in inciting racial hatred https://t.co/HsrLMW3uXF

A few drew comparisons to how Barack Obama handled Sandy Hook, and how he was widely mocked by conservatives for his display of emotions as he spoke to the victim’s families:

And the dbags at FOX News laughed at him.

Those accusations of crocodile tears were some of the first signs of what was to become the entire GOP raisin debt: accuse the other side of doing what you're actually the ones doing.

It’s easy to become desensitized to Trump’s narcissistic and irresponsible behavior, but even for him, this is low.