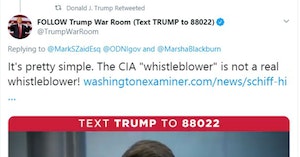 Despite claiming that he hasn’t really been impeached yet tweeting about his innocence constantly, Donald Trump is still raging about the whistleblower who brought the conversation between Trump and Ukraine President Volodymyr Zelensky to public attention.

Worse, his “Trump War Room” Twitter account tweeted out a Washington Examiner article that published the alleged name of the whistleblower in the headline, and Trump retweeted that from his personal account. 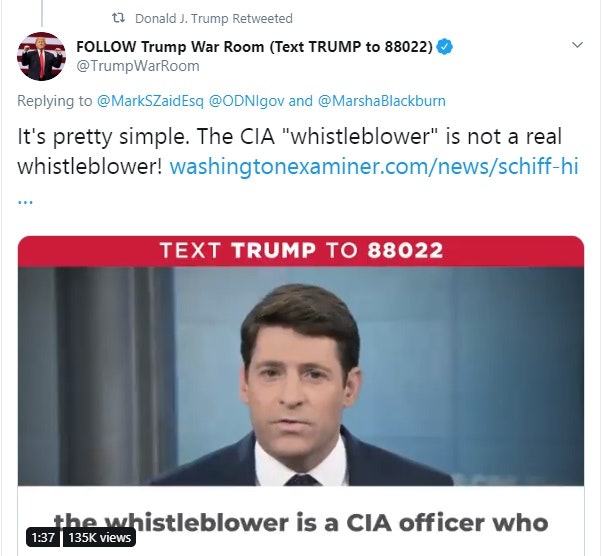 The Trump War Room tweet pushes the bizarre idea that “the CIA ‘whistleblower’ is not a real whistleblower.” Regardless of any hairsplitting over the definition of a whistleblower, the fact remains that naming this individual exposes them and their family to harassment and retaliation and could deter potential future individuals from blowing the whistle when they should.

Hence why many reputable news outlets have declined to publish the name that has been circulated by certain right-wing websites. That plus the fact that the name being circulated has not been verified to be that of the actual whistleblower and could be some random uninvolved person.

According to the Daily Beast, Trump had discussed whether he should publicly tweet this name with “various friends, media figures, and senior administration officials,” but several had advised him not to as it would be “counterproductive and unnecessary.”

Is anyone surprised that he was unable to follow this advice?

Members of Senate Whistleblower Caucus should protect#whistleblowers, not attack them. @ODNIgov & ICIG has made it clear lawful protections exist. So why is Senator @MarshaBlackburn pretending to be bi-partisan Caucus Member given her many attacks?https://t.co/C7hnkgupFj

Unfortunately for Trump, and as his advisers predicted, people are not reacting well to the president participating in the outing of a possible whistleblower.

How effing embarrassing that the “president” of the United States actually retweets the alleged whistleblowers identity.

Whistleblowers are protected by our laws and our constitution.

This fake “president” has no shame. And is a horrible person.

Laws are not for kings…. which is what Trump's delusion tells him he is becoming

@FBI There are people tweeting and a newspaper printing who the alleged Whistle Blower is. This person is protected under federal law, and if this is indeed the Whistle Bliwer, everyone outing their name, including the poster of this tweet, should be arrested immediately!

Did you just retweet the whistleblowers name? Wow you really want more articles. Ask and you shall receive. #resign #IMPOTUS

Remember when the GOP was the law and Order party?https://t.co/9VWwaAJEIl

So Trump’s “Impeachment war room” is now directly responding to his opponents’ tweets (in this case, the whistleblower’s attorney), and then having Trump himself retweet, to bring the MAGA hoardes into their threads.

Not a good look, guys.