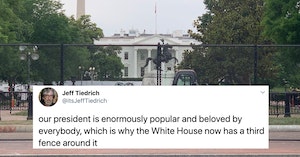 Donald Trump is not a president who is up to the response the American people need right. In all 50 states, people are protesting the murder of George Floyd in Minneapolis by officer Derek Chauvin, and by extension, racist police brutality everywhere. The Black Lives Matter movement has organized peaceful protests everywhere, and police everywhere have responded by escalating violence with tear gas, pepper spray, rubber bullets, and hands-on beatings. Unsurprisingly, this is making people much angrier.

And Trump’s response has been hiding, threatening states with military invasion, tear-gassing protestors for a photo op, and now back to hiding. The White House appears to be shoring up its defense with more fencing, possibly because Trump doesn’t feel quite secure enough in his little underground bunker with the lights off outside, like people are gonna forget where he is:

More fencing going up around the White House complex early this morning pic.twitter.com/VLBRnx1lgz

A lot of people are pointing out that Trump is finally getting to build a wall to keep the “bad guys” out, like almost every American not in his immediate circle. He promised to build a wall and he did it—he just had to shut the entire country out:

The President is erecting more fencing around the White House, has a police force protecting the perimeter, and is hiding in a bunker.

I always knew Trump was a little cream puff, but this is some next level cowardly sh*t he’s throwing down.

Unlike Sleapy Joe Biden, I'm getting prepared! I'm adding MILES of new fencing around MY White House! "BUILD THAT WALL!" I've ordered MY Bunker to be dug out deeper! Deeper than anyone thought possible!! AND I've called OVER 57 countries to find one that would grant me asylum!

Trump's WH just ordered a plethora of new fencing to be put up around the White House grounds to protect the Fake President. They keep pushing the fencing further and further out. Pretty soon, Trump is going to claim Washington DC all to himself. BUILD THAT WALL #Bunkerbitch!

our president is enormously popular and beloved by everybody, which is why the White House now has a third fence around it

According to reports, protests on Wednesday had been pushed much further back from Lafayette Park than ever before. The Park is where protestors were gassed so Trump could walk to a church and stand there holding the Bible, without notifying any of the actual church officials he was coming.

President Trump is ramping up the physical barriers between himself and protesters.

Just before dawn, the White House set up new fencing outside of Lafayette Park amid protests over the death of George Floyd, CNN's Boris Sanchez reports. pic.twitter.com/SZkhyblNtB

The fencing is pretty pathetic, but protestors today are standing right up against it. Is fencing better than police in riot gear as a barrier to the president? Or just more cost-effective? I’m betting this installation was pretty expensive, as the installation has been reinforced by concrete blocks and seems to extend in every direction:

It’s hard to know yet if Trump is overreacting, but it is definitely the response of an addled Fox News-addicted septuagenarian.