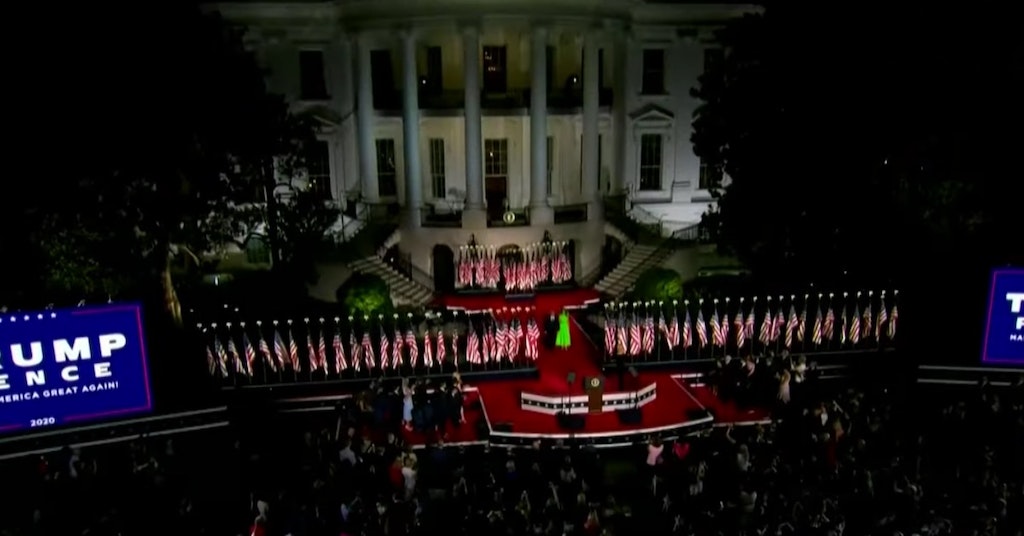 
The final night of the Republican National Convention was concerning for a number of reasons, but the use of the White House grounds for partisan campaigning left many viewers frustrated and sick at the likely violation of U.S. law.

The Hatch Act of 1939 explicitly “prohibits federal employees from engaging in political activities while they are working in an official capacity.” Holding the RNC at the White House, inevitably requiring the assistance of federal staff members, is likely in violation of this rule, according to critics.

But the Trump administration has hand-waved away any accusations of wrong-doing, per usual.

“Nobody outside of the Beltway really cares,” chief of staff Mark Meadows told Politico. “This is a lot of hoopla that is being made about things mainly because the convention has been so unbelievably successful.” (It is worth noting that the DNC repeatedly drew more viewers than the RNC.)

Of course, rules are in place for a reason, and just because the Trump administration repeatedly flouts them does not mean they have no purpose.

“The ideals advanced by the law and related rules, like the State Department’s policies, are intended to keep some government activity relatively detached from campaign politics,” writes Charlie Savage for The New York Times. “That includes protecting government employees down to staff members who perform tasks like putting out chairs for White House events from being coerced into performing work to elect a particular candidate, and ensuring that American diplomats are seen abroad as speaking for the entire country.”

And public frustration with the partisan display was palpable online last night, as people watching from home bemoaned the use of the White House grounds for campaigning.

Photos and video from the event also prompted concern over the lack of social distancing and mask usage, making it possible the RNC becomes a super spreader event, but that’s become the status quo for Trump events at this point.

Still, the refusal to institute any rules to protect people in the midst of a pandemic reaffirms Trump’s flagrant disregard for American lives.

While Trump insists on campaigning as the “law and order” candidate, it is obvious that neither law nor order mattered to him last night. All that matters, as is always the case with Donald Trump, is the appearance of winning.