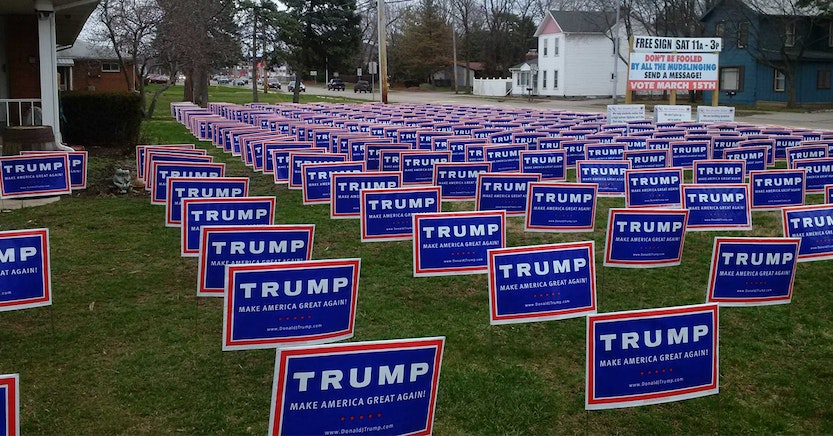 Donald Trump and his team seem desperate to turn around the narrative that he’s lagging behind Joe Biden in the upcoming presidential election, even though polls have consistently shown that to be true.

One of his recent attempts to regain the optics of success was tweeting out a photo of a yard with far more Trump signs than the entire country should own, let alone a single person.

The problem is that the photo not only isn’t from this year, it isn’t even from this election cycle.

Alec MacGillis, the reporter who took the photo back in 2016, immediately clapped back at Trump with the original tweet in which he shared the pic, as well as a request for credit.

Trump tweeting out a four-year-old photo isn’t really a big deal in the grand scheme of things, beyond the fact that it would be nice if he would spend more time addressing the ongoing pandemic he’s done very little about, rather than praising fake hype around his reelection campaign.

But it did give people a brief opportunity to dunk on Trump for something that wasn’t soul-crushingly awful, and with this year the way it is, sometimes you just have to take what little enjoyment life throws at you.

And one Twitter user confirmed that the yard in the original picture doesn’t still have this many Trump signs out front.

Maybe they’re just really into whatever free signs they can get and it just happened to be easiest to procure Trump signs in 2016? To each their own. But it would sure be nice if Trump ever did the slightest bit of fact checking before promoting something — one might even call it a novel and fresh idea for this administration.