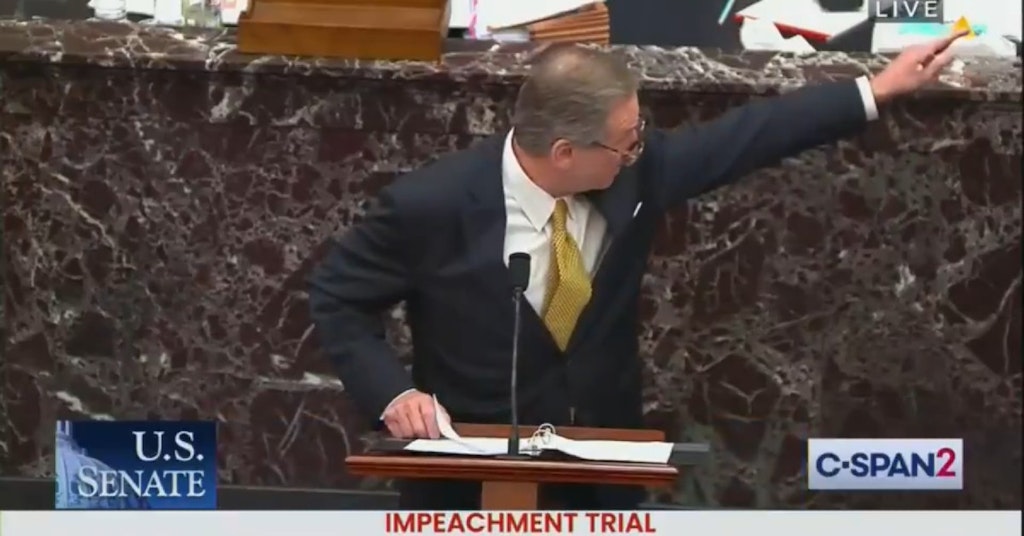 After two days of devastating presentations and testimony by the prosecution, the defense in the second impeachment trial of Donald Trump kicked off their actual arguments by blaming anti-fascists for the whole thing.

One of Trump’s lawyers claimed that one of the first people arrested for storming the Capitol on January 6 was the “leader of antifa,” which does not exist.

“A small group who came to engage in violent and menacing behavior hijacked the event for their own purposes,” said Michael van der Veen. “According to publicly available reporting, it is apparent that extremists of various different stripes and political persuasions preplanned and premeditated and attacked on the capitol.”

“One of the first people arrested was the leader of antifa. Sadly, he was also among the first to be released.”

As anybody who is even slightly familiar with antifa knows, there is no “leader of antifa” because it is not an organization with centralized leadership, but rather a set of ideas and tactics. There is a loosely-associated number of organizations that put these into practice, but strict hierarchies are really not their thing.

Those who have adopted the anti-fascist label have already mocked the kind of assertions voiced by van der Veen in the past by jokingly proclaiming themselves to be the “CEO of Antifa” and similar gags to the point that the joke is now old.

The arrested individual van der Veen is likely referring to is likely John Sullivan, also known as “Activist John,” who was kicked out of multiple anti-fascist groups and protest scenes for provoking violence and having ties to the far-right. If Sullivan is some kind of agent who hijacks events to turn them more violent than was ever intended, this was never meant to be in favor of anti-fascism.

The entire idea that the real villains responsible for the attempted coup incited by Trump was an imaginary and weirdly-pronounced version of antifa has been pushed by far-right figures since the day of the insurrection. However, even the FBI, which has targeted anti-fascists and Black Lives Matter groups more than white supremacists, has admitted that there is no evidence that antifa was at all involved in the Capitol riot.

Trump’s defense has so far further argued that the second impeachment was not about him inciting a violent insurrection on the Capitol as Congress tried to certify presidential election results that ended in five dead. Rather, they say cancel culture is at least partly to blame.

“It is about Democrats trying to disqualify their political opposition. It is constitutional cancel culture,” said van der Veen. “History will record this shameful effort as a deliberate attempt by the Democrat Party to smear, censor, and cancel, not just President Trump but the 75 million Americans who voted for him.”

Wake us up when that happens.