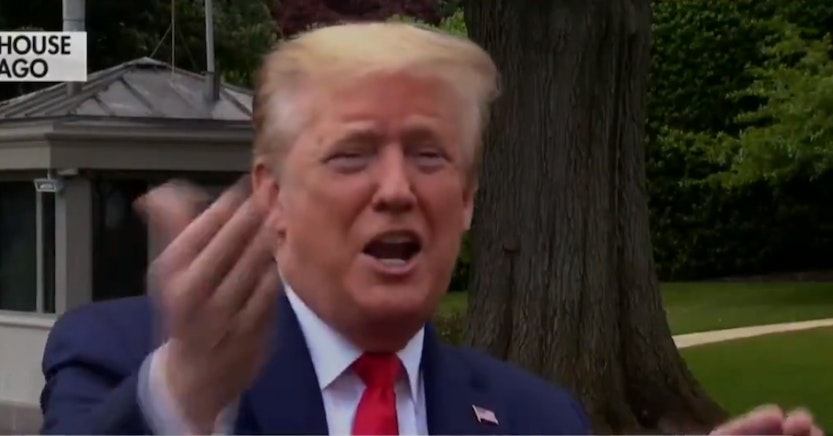 In another White House lawn statement with helicopter noises in the background, the president confirmed that he “tested positively toward the negative” on his latest coronavirus check. Donald Trump has said that he and everyone who gets close to him is being tested daily for the virus while hospitals across the U.S. are still lacking enough tests for everyone who requests them, let alone to do track and trace.

When pressed by reporters, Trump confirmed that he meant he tested negative, but you can see why they were confused.

Is this that toxic positivity thing people are talking about?

This bizarre statement was made after he claimed to have one more day on his supposed treatment with hydroxychloroquine, which he said he is taking to prevent COVID-19 but has not shown positive impacts on even treating the illness, let alone preventing it. Many people were skeptical of this claim due to the fact that the anti-malarial drug comes with dangerous side effects including heartbeat irregularities, but he has stood by his claim. Apparently he’s now going to stop taking it, but hopes to continue to test positively negative.

Trump’s comments gave a lot of Twitter users some flashbacks from the U.S. version of The Office, in which manager Michael Scott once became confused by the use of the word “negative” to mean “you don’t have cancer.”

Others are simply aching for the day when we no longer have to daily witness this man’s constant buffoonery.

This is a beautiful tribute to Fred Willard. https://t.co/7EosgjSpr4

Is he just straight up doing this for The Daily Show now? https://t.co/gMkHqYTB9I

It is though he wears a shock collar that zaps him if he thinks or says anything negative about himself. A negative COVID test being a positive made his brain short circuit.

He also said he wanted to put the reporters on a rocket and blast them into space and the feeling was probably mutual.