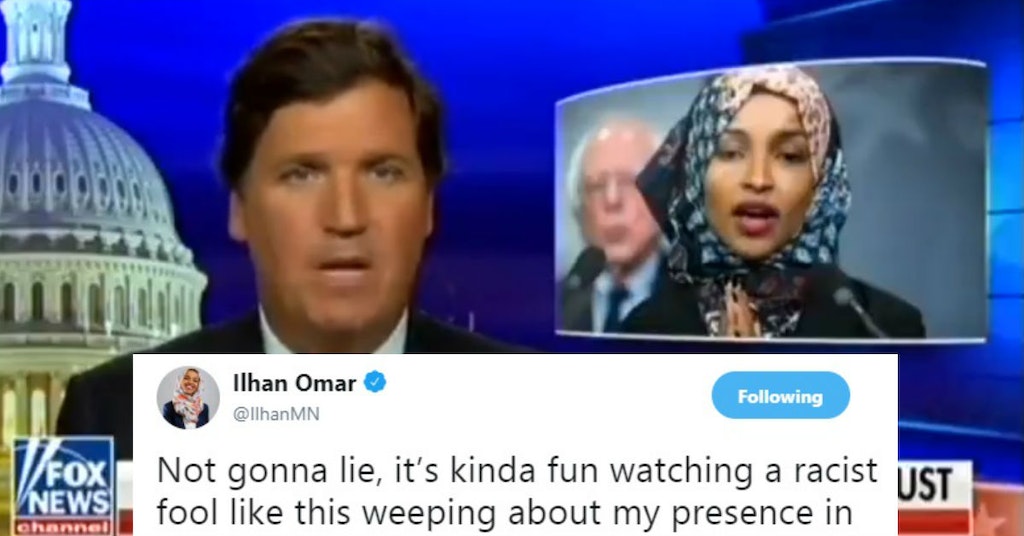 Fox News’ current most boycotted television personality Tucker Carlson went on another rant about Representative Ilhan Omar, engaging in racist, xenophobic, and Islamophobic tropes all in an impressively short amount of time. During his Tuesday monologue, he accused Omar of hating the U.S., being ungrateful, and points to her as a supposed example of why “the way we practice immigration has become dangerous to this country.”

She "is a living fire alarm. A warning to the rest of us that we better change our immigration. Or else" pic.twitter.com/p2IQWsqP5Q

What’s dangerous is the kind of xenophobic rhetoric that has led to an increase in hate crimes and a flood of explicit death threats against Rep. Omar.

“Some of the very people we try hardest to help have come to hate us passionately. Maybe that’s our fault for asking too little of immigrants? We aren’t self-confident enough to make them assimilate, so they never feel fully American,” he said. “Or maybe the problem is deeper than that? Maybe we are importing people from places that are simply antithetical to ours? Who knows what the problem is but there is a problem and whatever the cause, this cannot continue.”

He then blamed immigration for the fall of Rome, which is a statement that would cause physical pain to any history major. In reality, Rome was weakened by overspending on the military, an increasing gap between the rich and the poor, and political corruption before actual barbarian invaders (not immigrants by any definition) arrived. (Sound familiar?)

Omar herself responded to the segment with good humor.

Not gonna lie, it’s kinda fun watching a racist fool like this weeping about my presence in Congress 🤣🤣

No lies will stamp out my love for this country or my resolve to make our union more perfect.

They will just have to get used to calling me Congresswoman! https://t.co/nRS13yWivK

As amazing as that response is, there is some concern that Tucker is rapidly fanning the flames of the anti-immigrant sentiment in the U.S. that has culminated in what Holocaust experts have called actual concentration camps.

It’s these basic facts that have people concerned that it’s Tucker and his fans, not Omar, who are damaging America.

Many people have already condemned Carlson for this latest attack on a young woman of color in Congress, calling it the most racist rant to ever come out of the Fox News commentator’s mouth, which for him is pretty impressive.

Even for Tucker Carlson, this is outrageously racist.

Advertisers need to wake up.

By financially supporting this show and the people who rubber stamp these messages, you are sponsoring white supremacy. Full stop. https://t.co/I3Q9BYcPYo

This seems shockingly racist even for the frozen fish heir who is known for blatant racism https://t.co/BVmayXBGRX

Others pointed out the double standard Carlson uses for deciding who gets to criticize the country:

When Donald Trump harshly criticizes the United States, Tucker Carlson praises him as a teller of hard truths.

When Ilhan Omar does, he calls her “living proof that the way we practice immigration has become dangerous to this country.” https://t.co/YZjlejLYSy pic.twitter.com/zEN0hTwpa0

Wait. So Carlson is mouthing off because a refugee turned American congresswoman can't just be happy that America is what it is? If being unhappy with the state of things is unpatriotic, wtf do we make of the "Make America Great Again" slogan?https://t.co/VphpxSuY6w

More called out Carlson for the danger these kinds of baseless smears put Omar and others in:

Tucker Carlson on Ilhan Omar: “We are importing people from places whose values are simply antithetical to ours."

This is a white nationalist, racist talking point. It's now mainstream. Take this literally and seriously. At the very least, call this out please.

When right-wing talkers like Tucker Carlson attack ⁦@IlhanMN⁩, they promote stereotypes and false narratives. In reality, ⁦@Ilhan⁩ is a savvy, hard-working American immigrant who is determined to make the country she loves freer and more just.
https://t.co/Ook1D8MNBr

This is a violent & dangerous attack on a sitting Congresswoman because of who she is and what she stands for.

It’s white nationalism in action.@IlhanMN won’t back down. And we must loudly have her back and keep supporting the rights & leadership of immigrants in this country. https://t.co/sZWDfKMKso

This is what Republicans consume every night. Just so you know why this country is so screwed up. #CLTV https://t.co/MuPT5TJXlr

This is dangerous. This is unacceptable. This is incitement against a sitting member of Congress. @TuckerCarlson has no shame. https://t.co/DGR3psNiya

@Ilhan is a beloved rep and we in her district are appalled at the openly racist and islamophobic attacks that have lead to death threats- now little racist lord fauntleroy is going to cause more.

Disgusting @foxnewstalk @TuckerCarlson there is no word but disgusting for you.

Some are reminding everyone who still advertises on the Tucker Carlson Show when boycotting is still a viable and satisfying option.

People are calling out StarKist tuna and other Tucker Carlson/Fox News sponsors after the host targeted Rep. Ilhan Omar in a racist monologue, saying she's someone who "hates this country" & that she's proof that U.S. immigration is "dangerous."

Unfortunately, there are still many people who agree with Carlson, and as long as he keeps the ratings high, Fox News will continue to employ him.