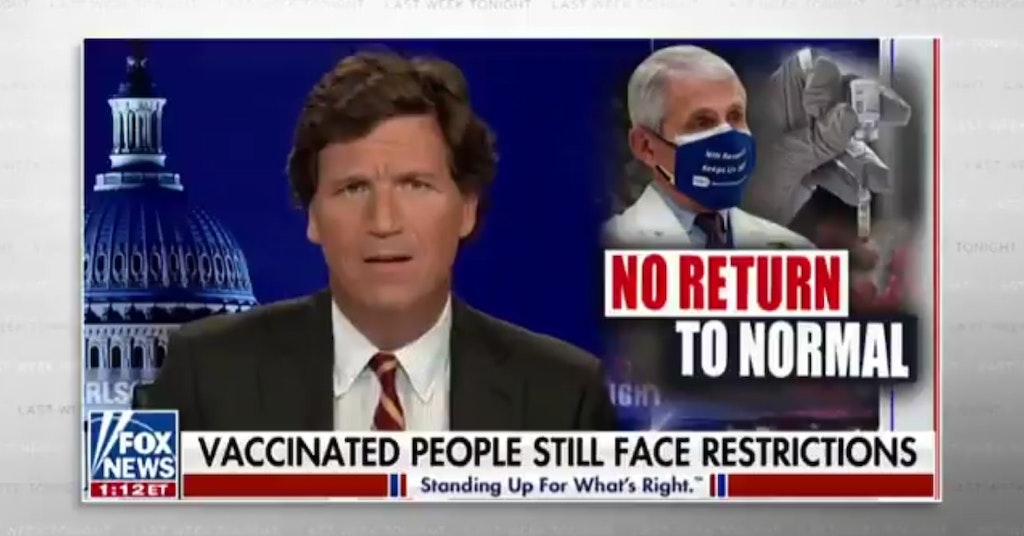 Fox News host and court-proven non-news person Tucker Carlson is once again leaning into anti-vaxxer misinformation as part of his mission to be the worst person allowed on TV, falsely claiming that 30 people per day are dying from the coronavirus vaccine. The “evidence” he used to support this falsehood was an alarmist Facebook video citing the widely-criticized U.S. Vaccine Adverse Event Reporting System (VAERS), which collects unverified stories of bad reactions to vaccines.

“Between late December of 2020 and last month, a total of 3,362 people apparently died after getting the COVID vaccine in the United States,” Carlson said. “That is an average of roughly 30 people every day. So, what does that add up to?”

Carlson then managed to cast doubt upon his own source himself by saying that “fewer than 1 percent of vaccine adverse events are reported by the VAERS system.” Instead of backtracking on his claim, he instead used this unsourced claim to push the idea that the number of COVID vaccine deaths could be much higher.

In reality, agencies much more reliable than an unverified online reporting system that any anti-vaxxer could access to push an agenda have always tracked complications, and especially deaths, following the administration of new vaccines. VAERS is run by the CDC and itself warns that “reports may contain information that is incomplete, inaccurate, coincidental, or unverifiable” and that “the inclusion of events in VAERS data does not imply causality.”

According to national data, 45 percent of people living in the U.S. have received at least one dose of the COVID vaccine, amounting to at least 148,562,891 people. Another fact is that sometimes, people die. There were always going to be people who died soon after getting the coronavirus vaccine, but that doesn’t mean that they died because of it.

Carlson has been widely criticized for his tactic of “asking questions” without doing any work to answer them, as you might expect from someone working for a supposed news organization, in order to sow doubt about things such as the safety of vaccines that have been verified by actual scientific sources. It would seem that the simple answer of “sometimes people die” is not convenient to the pundit’s agenda.

The CDC has already addressed the reports of deaths soon after people got the coronavirus vaccine, saying that they have reviewed cases and were unable to find any real link between the shot and the deaths.

“CDC and FDA physicians review each case report of death as soon as notified and CDC requests medical records to further assess reports,” their website reads. “A review of available clinical information, including death certificates, autopsy, and medical records has not established a causal link to COVID-19 vaccines.”