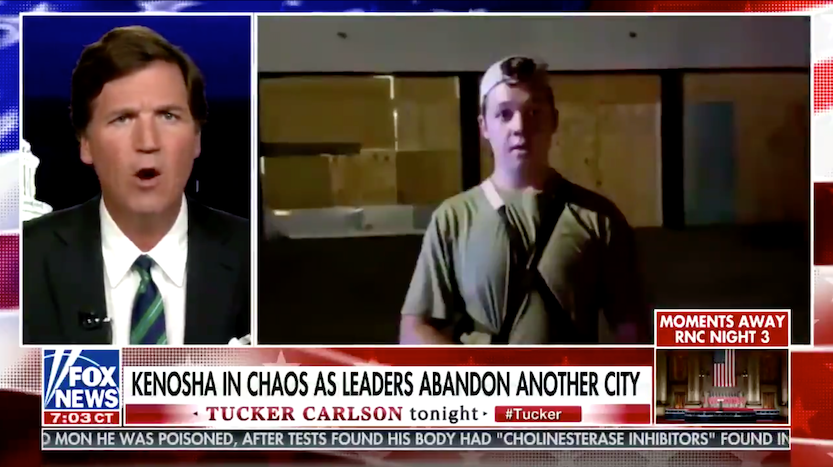 On Sunday, 29-year-old Jacob Blake was shot in the back seven times by a police officer dragging him by the shirt in Kenosha, Wisconsin. He survived this attack, but doctors say he is paralyzed from the waist down and it’s unclear if this condition will be permanent.

Understandably, protests erupted in Kenosha. On Tuesday night, a 17-year-old from Illinois named Kyle Rittenhouse is alleged to have shot and killed two people with his rifle, leaving another wounded. Videos of the scene show that police interacted positively with a man alleged to be Rittenhouse and the group of white men and women who were “protecting” a gas station from potential looting.

Despite protestors trying to alert the police to the gunman’s crime, he was allowed to leave the scene safely and without being put under arrest. He was charged with murder on Wednesday, and since then, conservative talking heads have been going to into overdrive in an attempt to justify the teen’s actions. Many of them are claiming he shot these people in self-defense, but Rittenhouse is not from Kenosha. He is a former police cadet who crossed state lines with a gun.

In reality, the people defending Rittenhouse seem to know exactly what he did, and they’re doing far more than defending it—they’re encouraging it. It has been noted how Donald Trump’s mouthpieces have been going on TV and essentially announcing that more people should do what Rittenhouse did in support of Trump.

Kellyanne Conway quoted a Wisconsin restauranteur on Fox News, saying, “‘Are you protestors trying to get Donald Trump re-elected? He knows…that the more chaos and anarchism and vandalism and violence reigns, the better it is for the very clear choice on who’s best on public safety and law and order.'”

"The more chaos and anarchy and vandalism and violence reigns, the better it is for the very clear choice on who's best on public safety and law and order" -- Kellyanne Conway makes a case that the killings of peaceful protesters will benefit Trump politically pic.twitter.com/ClJ6ArrbkE

In a segment on his show, Tucker Carlson seemed to suggest that more teens should enforce “law and order.”

Tucker: How shocked are we that 17 year olds with rifles decided they had to maintain order when no one else would pic.twitter.com/MGl7tdz9B5

“Everyone could see what was happening in Kenosha it was getting crazier by the hours,” said Carson. “So are we really surprised that looting and arson accelerated to murder. How shocked are we that 17-year-olds with rifles decided they had to maintain order when no one else would.”

This stands in contrast to what Carlson said about armed men patrolling the streets when the protests in response to George Floyd’s death began. In early June, Carlson ominously intoned that the demonstrations would lead to no one wanting to be a police officer.

“At that point, who will enforce the laws?” he asked. “Who will be in charge?”

Teens murdering people in the street is not legal, just to be clear. But the Trumps of the world seem to want more people to deputize themselves and head out into the streets.

What doesn’t seem to occur to them, and probably not his followers, is that we are currently living under Trump’s reign. This is happening with him in office. Voting for four more years of it will be more of the same and worse.