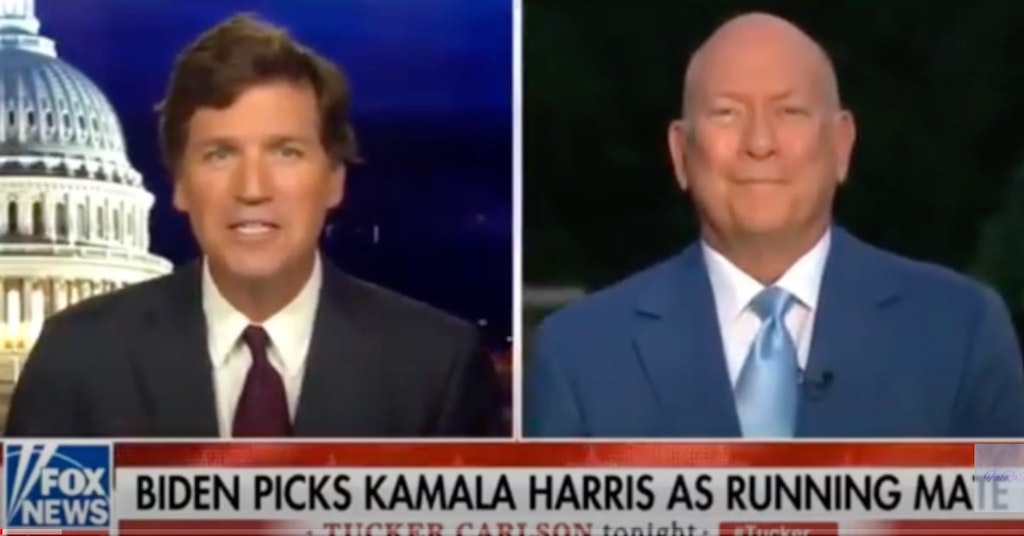 But Tucker Carlson claimed he mispronounced Harris’s name during a recent segment on accident all the same, after being politely corrected by his own guest.

Richard Goodstein, a Democratic political consultant, stopped by Fox News’ Tucker Carlson Tonight on Tuesday for a conversation hours after Harris was officially announced as Joe Biden’s running mate. In a clip that has since gone viral, Goodstein stepped in after several incorrect pronunciations to let Carlson know the proper way to say the Senator’s name.

“Tucker, can I just say one quick thing? Because this is something that will serve you and your fellow hosts on Fox — her name is pronounced 'comma-,' like the punctuation mark, '-la'. KAH-mah-lah.”

“So what?” Carlson retorts, as if her name is completely inconsequential.

“I think, out of respect for somebody who’s gonna be on the national ticket, pronouncing her name right is actually kind of a bare minimum,” Goodstein says.

Ever the same, Carlson immediately goes on the defensive, laughing and pointedly twisting his guest’s words.

“So I’m disrespecting her by mispronouncing her name unintentionally. So it begins. You’re not allowed to criticize Kah-MAH-lah Harris, or KA-mah-lah Harris, or whatever—“

“No, it’s not whatever,” Goodstein stops him.

Carlson then shuns the idea that she’s “immune from criticism,” which is apparently what he considers purposeful mispronunciation of a Black woman’s name, and insists “our political leaders must be held to account.”

Carlson is going to have to mention Harris’s name repeatedly over the next three months — if not the next four years — so he might as well suck it up and start doing it correctly now. If you have to sink to mispronouncing the name of someone you dislike rather than coming up with actual critiques, you should probably find a new job. But that’s something we already knew about Tucker, as well.