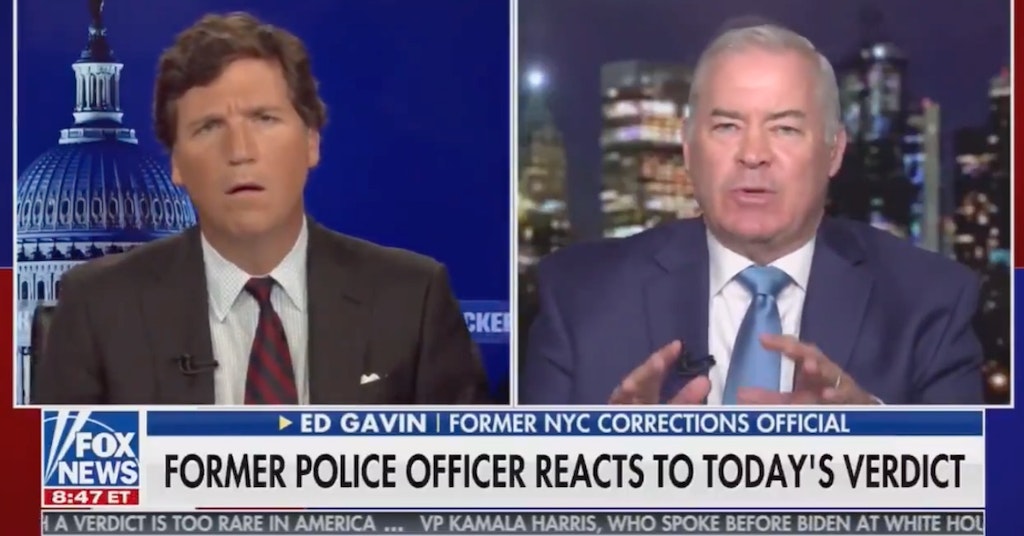 Tucker Carlson spent his show last night blasting the outcome of the trial against Derek Chauvin for the murder of George Floyd—and had a total meltdown in the process.

Carlson’s entire hypothesis regarding why the trial was a failure was his claim that the jury reached a guilty verdict purely due to watching months of protests in the wake of Floyd’s death. He suggested they were all afraid for their lives, due to “months of burning and looting and murder by BLM.”

There are cases constantly being tried in this country that have been highly publicized prior to going to trial, or in which jurors may feel they could face retaliation based on the outcome. We don’t know if the latter was actually true in this case, despite Carlson’s insistence, but we do know that the jury was presented with tons of evidence that convinced them, and most of the country, that Chauvin is guilty.

But Carlson appeared more interested in outrage that suited his own preconceived conclusion than accepting the possibility that the jury came to their verdict fairly and that Chauvin’s decision to kneel on a man’s neck for nearly nine minutes while he said he couldn’t breathe was, in fact, murder.

Though Carlson mostly welcomed guests who agreed with his stance, one didn’t follow the script.

It’s clear from the start that Carlson wanted to guide him on a very specific agenda, opening up the interview by questioning who would even want to join the police force after an officer was held accountable for murder. But Gavin wasn’t biting.

“I think people will still become police officers. This really is a learning experience for everyone. Let’s face it. What we saw in that video was pure savagery,” he said, referring to the video of Floyd’s death. “I’d like to see more training for police. I’d like to see the police trained as EMTs like in the fire department.”

Carlson let Gavin talk about everything he thinks Chauvin did wrong for a while, but then he called the verdict “just.”

And the host quickly cut in with some sarcastic question about whether cops should even enforce the law.

“Well the guy who did it looks like he’s going to spend the rest of his life in prison,” Carlson jumped in. “So I’m kind of more worried about the rest of the country, which, thanks to police inaction, is like, boarded up?”

He then let out a truly maniacal-sounding laugh before abruptly cutting off the interview entirely and booting Gavin from the program.

Carlson essentially seems to be claiming that police will no longer be willing to enforce the law if they are afraid they will be held accountable upon murdering someone, which is actually a pretty wild condemnation of their policing methods if you follow him on that leap.

But the real takeaway for most people was how easily he was shaken by having someone not even challenge him directly, but simply not fall in line with the exact narrative Carlson wanted to present.

And that laugh was…something else.