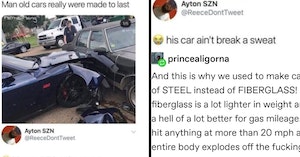 There’s a lot to criticize about modern products. Mass production has made some things more affordable, in theory, but they frequently wear down faster too — it’s why our grandparents might have had the same furniture sets for their entire marriage, still in flawless condition, but the rest of us are hitting up Ikea (or even more expensive stores) every couple of years.

But one place this frustration with things being designed to be replaced has no bearing is in the automobile industry, something overly confident tumblr users learned after uninformed complaints about the state of modern cars.

A post shared to reddit showed a tumblr exchange that began with a photo of a newer car smashing into an older one, and only the former crumpling under the pressure.

Tumblr users immediately shared their opinions on the matter as cold, hard facts, blasting modern cars and praising the old.

“And this is why we used to make cars out of STEEL instead of FIBERGLASS!” @princealigorna claimed. “You hit anything at more than 20mph and the entire body explodes off the f—king thing, and now you’re spending more to repair the car than it’s worth.”

Another user chimed in that this is an example of “planned obsolescence,” and bemoaned the state of capitalism.

Modern cars are designed to crumple upon impact, yes, but not for the reasons these users think — and fortunately, someone came along to give them a lesson in physics.

@becausedragonage explained that cars are meant to crumple in a very specific way, so as to best protect occupants in the event of a crash. And that isn’t the only benefit of these new designs.

Information on “crumple zones” and how they came about is readily available across the internet for anyone who needs more than a tumblr post to believe it, but an insurance estimator also backed up the post with their own experiences.

Raging against capitalism can be a noble pursuit, but it helps to be informed as to whether what you are raging against actually has anything to do with capitalism at all first. And don’t forget to always double and triple check anything you read on the internet.