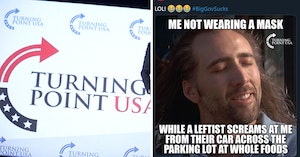 Co-founder of the notorious right-wing student action group Turning Point USA Bill Montgomery has died from complications related to COVID-19, according to people close to him. The 80-year-old launched the organization in 2012 with Charlie Kirk, who told POLITICO that he “can’t put into words how saddened I am by the death of my dear friend Bill Montgomery.”

Prior to this news, Turning Point USA had frequently posted memes and other content mocking people for wearing masks and being upset that others refused to during the pandemic. Some were deleted after news broke of Montgomery’s death, but not before someone got screenshots.

Pro-mask individuals have found it difficult not to point out the irony.

Meanwhile, fans of Turning Point USA and Montgomery such as the conservative, pro-Trump strategist Caleb Hull have asked that everyone stop “politicizing” the illness that killed him.

“I really wish people would just stop politicizing this pandemic and grow up while innocent people around us are dying,” Hull said. “You have no idea how painful it is to be forced to sit at home while your loved one dies alone in a hospital.”

Unfortunately, many do know that pain, and often blame that on a failure of the Trump administration to contain the pandemic in the U.S., partially due to the president promoting anti-mask sentiment.

Charlie Kirk himself had said on his podcast earlier this year that while he thought that the elderly and those with chronic health conditions should self-quarantine, he was against many efforts to contain the pandemic so they wouldn’t have to. This included mask mandates, which he resoundingly rejected on last Sunday’s podcast.

He went on to promote debunked theories that wearing masks can “actually make you sicker” and reduce your blood oxygen levels, claiming to have personally met “many doctors that hold that view.” He also echoed the “my body, my choice” line that his organization has rejected when pregnant people use it.

With the number of daily deaths in the U.S. from COVID-19 rising back to well over 1,000 per day this week, people are having a hard time finding sympathy for Montgomery, Kirk, or Turning Point USA.

Montgomery is survived by his wife and two children.