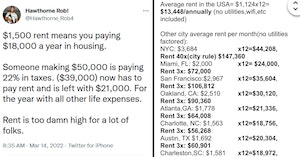 A recent tweet fairly blew people’s minds when a California man, who seems to go by “Rob,” outlined in simple terms just how much the skyrocketing cost of rent in the U.S. is eating up average paychecks Americans are dragging home. Starting with the fact that the median individual income brought home in 2021 was $51,000 (rounded down to $50,00 by Rob), around where it’s stagnated for many years now, and factoring in taxes, even people making this much are left with poverty wages.

Worse, this relies on assuming the average rent is $1500, which is actually quite low for major metropolitan areas where all the jobs are.

In the U.S., these other expenses include health insurance and very often medical debt payments, car insurance and payments, the rising costs of gas and energy and water, and, of course, food. And that’s assuming you’re making more than literally half the working population, don’t have kids or other family members who need care, can work 40 hours a week at least, etc.

Economists and watchdogs have been sounding the alarm for some time that the rising cost of everything combined with stagnated wages and a weak social safety net could have severe consequence for the entire economy. This unsustainable system, combined with the fact that we’re all waiting for multiple bubbles to burst that only start with housing, has led many to warn that a devastating economic crash is on the horizon.

Another Twitter user did the math on cities with some of the highest average rents where it’s common for landlords to demand proof that a prospective renter makes three times more than the monthly rent. In some cities, that means you literally have to make six figures just to afford an average apartment.

This crunch continues to get worse as lawmakers wonder why the homelessness population, especially in the cities listed, is increasing drastically. Unfortunately, rather than doing anything to help people, the same cities are largely conducting police “sweeps” of homeless encampments, throwing away everything they have and shooing them off to shelters that have no beds or won’t admit them for various reasons.

If things keep going as they are, many are confident that those who were born lucky won’t be able to ignore this problem for much longer.