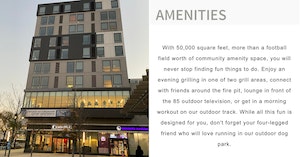 It’s always amazing when the perfect story comes together over a viral tweet, such as the time just this week when a funny post about a divorced man and an apartment building blew up until it reached one of the carpenters who built the place.

The original tweet was a joke about the look of the apartment complex exterior by freelance writer Rebecca McCarthy who relayed a story told to her by an unnamed man she met at a party.

“Guy at a party told me he got divorced during the pandemic and tried to organize his building, only to realize everyone living there was also a recently divorced guy,” said McCarthy. “Thought he was exaggerating until I saw the building.”

The apartment building—perched atop a Chipotle and a place called “Insomnia Cookies” that’s “open late”—is one of those drab high-rises with dull neutral colors that’s supposed to be minimalist or maybe look like something from a cool sci-fi movie, or something. We can’t personally figure out what is appealing about this style, seen more and more often among new apartment complexes and houses, but it does seem to attract a certain type of person.

Recently divorced men living in apartments is also a common phenomenon, sometimes because moms tend to get full or primary custody of the kids and therefore need to be the ones who keep the house. Perhaps the aesthetics of the places these men often end up could be attributed to post-divorce depression.

It’s more than simple appearance, however. Intrigued Twitter users soon discovered the location and website for the apartment complex, with the amenities list being referred to by one tweeter as a “divorced man dog whistle.”

“With 50,000 square feet, more than a football field worth of community amenity space, you will never stop finding fun things to do,” the amenities page reads. “Enjoy an evening grilling in one of two grill areas, connect with friends around the fire pit, lounge in front of the 85 outdoor television, or get in a morning workout on our outdoor track.”

Plus, they apparently have their own dog park for resident wife replacements.

There are absolutely apartment buildings that are built with divorced men in mind, which just makes good business sense seeing as there is no shortage of divorces in the U.S. This one may just happen to be the ultimate divorced guy apartment, to the extent that one of the carpenters who was hired to physically build the complex found the viral post and admitted that he is also divorced.

The saga of the divorced guy apartment comes full circle.

The idea of the “divorced guy” has become something of a meme lately, perhaps partially fueled by the antics of the new Twitter CEO Elon Musk, who was recently accused of giving off massive “divorced dad energy” after he posted a photo of his bedside table. Two replica guns and four caffeine-free Diet Coke cans are exactly the kind of thing we would expect to see in this building.

Either way, many Twitter users are finding this whole saga to be deeply hilarious.