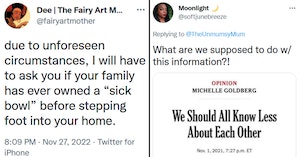 Today in things nobody wants to think about but probably happens a lot more than you know, Twitter has been rocked by a writer and mother who tweeted that her family had discovered the uncomfortable truth about the household “sick bowl.” Yes, she did mean the bowl she gives to the kids when they’re sick to throw up in.

It turns out, however, that this bowl has more uses than just the one.

“My kids have just discovered that the family sick bowl and the cake mix bowl are one and the same. In my defence, this was also the case when I was growing up,” wrote Sarah Turner, “but now I’ve said it out loud, I realise I need to break the cycle. I won’t be taking any further questions.”

Turner appeared to change her mind on this issue mid-tweet, but this did little to calm down the many Twitter users who found the idea of using the vomit bowl for making cakes to be one of the nastiest things that ever entered their minds. We can all assume that this bowl was thoroughly washed after each puke, or at least we need to in order to move on with our lives, but a lot of people still found it to be unacceptably unsanitary.

“I’d like ‘Ancestors responsible for spreading The Plague’ for $800 please Alex,” one user cracked.

Others launched into a discussion about the appropriate items to use to deal with the unfortunate reality of kids throwing up, which they will do, and can’t be counted on to make it to the toilet. Some users reported that their family had a designated bucket or other receptacle for vomit, though this was still too gross for people who don’t like the idea of having to wash anything out after it’s been filled with the vile fluid.

People suggested plastic bags, though this carries the risk of holes, or a small trash can lined with a garbage bag for extra assurance that nobody has to touch puke.

Those who did or still do have sick bowls in their family similarly reported that this was a tradition passed down in the families, and they simply never put much thought into it. The most common response to this is that people simply need to find some new traditions.

One of the most common responses was simply to post a screenshot of that article titled “We Should All Know Less About Each Other.”

Some took the more serious route of pointing out that not all viruses will be eliminated from every surface with a simple or even thorough wash. There is truth to this, however a good scrubbing should kill enough of any virus that what remains will not be a threat to anybody, as you generally need to be exposed to a high number of individual viruses to risk getting sick.

Furthermore, the vast majority of viruses can’t survive long outside of the human body — though the dreaded norovirus can survive for weeks. That’s the one responsible for a particularly nasty version of what is commonly called the “stomach flu.”

Of course, no amount of logic or science can override the visceral response to imagining eating baked goods or popcorn out of something that once contained vomit. The good news is that for once, something someone tweeted is bringing everyone together, mostly with amusing jokes.