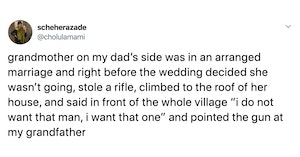 Are you ready for the latest in Twitter share time? You’d better be, because a Twitter user going by the name “The Irish Atheist” asked a good one—what is “a super-cool thing one of your ancestors/older family members did”?

Most of us have one of those family members who was either a trouble maker, a bit of an eccentric, an activist, or simply didn’t care what anyone else thought about them. Some of the examples given were worthy of the history books, others were just common people doing what they had to do to protect themselves and their families but deserve to be remembered as heroes regardless.

Here are some of the best examples of cool family stories from Twitter:

Grandfather maimed or killed two Gestapo officers when they came for his parents (he was an amateur boxer). Took his parents and two siblings and immediately left. Made it to France. Fought with the French resistance. Mid-war emigrated to USA. Helped plan D-Day as a mapper. pic.twitter.com/oliXPrJuIY

I’m proud of a relative recorded as “England’s most reviled man”.

Hugh de Spenser the Younger was “drawn, hung, emasculated and quartered” in 1326 for high treason.

He had been the gay lover of Edward II. When Ed died, Hugh fled and became a pirate.

grandmother on my dad’s side was in an arranged marriage and right before the wedding decided she wasn’t going, stole a rifle, climbed to the roof of her house, and said in front of the whole village “i do not want that man, i want that one” and pointed the gun at my grandfather https://t.co/DlKzRCH24C

At age 17, while relatives were being killed in Auschwitz, my Dad invented universal valve characteristic (early radio: RAF) and flew in a Lancaster to sabotage the German transmitter station at Fassberg air base ????????
Photo he sneaked of it below. pic.twitter.com/2ecygfHtrV

My (very Irish) single, bartender great-grandmother would let battered women stay at her place to get away from their husbands. She was 6’2, so if they came around to cause trouble she’d wail on them

Buried his mistress on top of his wife https://t.co/KArJ8Pdt4t

During the occupation of Norway, one of my grand-uncles had to smuggle radio equipment past a Nazi checkpoint. When the guards asked him what he had in his backpack he said “Oh, you know – radio equipment for the resistance!” which was such an outrageous joke they let him pass https://t.co/EiEq9uoKaC

Ran a brothel. Led the FBI to her client John Dillinger in exchange for citizenship. Went down in history as “The Woman in Red.” https://t.co/ayz6vuyPqL https://t.co/R9rChjHrSF