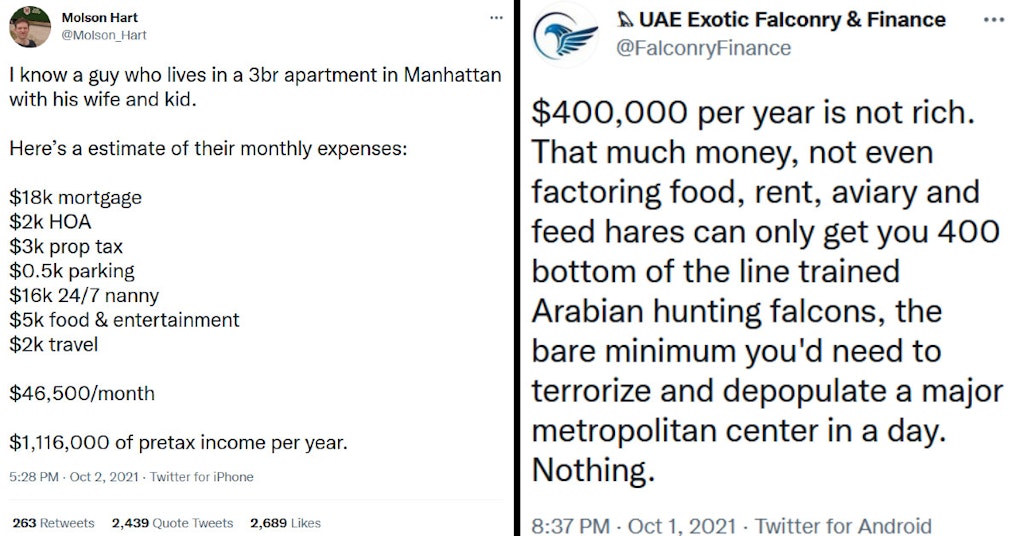 In apparent response to the growing opinion among average folks that a few lucky individuals shouldn’t be allowed to hoard huge amounts of cash that they can barely figure out to spend while the poor sink further into poverty, some have begun to try and defend their riches with ill-advised tweets. Two Twitter posts in particular have recently been the subject of much online ire — one asking people if raking in $400,000 per year makes someone “rich” and another laying out the monthly expenses of someone making over $1.1 million per year as though spending that money makes them any less wealthy.

Many of the responses to the former tweet from rich people state that no, $400,000 per year is not that much money, because after all the expenses from their luxury lifestyle, they only have enough leftover to equal a poverty salary. Of course, the majority of Americans find that they have little to nothing leftover after spending their own poverty salary on things like rent and gas for their aging vehicles and groceries they have to carry themselves.

The disparities in responses to these tweets, with the masses utterly dragging them to the bafflement of people who make $400,000 or more, highlights just how out of touch the rich appear to be with those who have to struggle and worry about money every day. For the average American, spending $5,000 every month on food and entertainment is practically inconceivable, with many asking what you could possibly buy on a monthly basis to reach that amount. And, of course, most of us don’t have the luxury of a 24/7 nanny, or the ability to travel or own a home.

Exhibit A: Molson Hart, CEO of a company and author of that $1.1 million yearly tweet, said himself that all that “looks totally extravagant but it’s not actually.”

It gets worse when you consider that, after adding up the monthly expenses in the latter tweet, the result is a mere $558,000 in yearly expenses. Unless this “guy” is taxed at a rate of 50 percent, which he is almost certainly not, he has a lot left over at the end of the month to go into investments or rot in some offshore account. A lot of rich people seem to be unable to comprehend the idea of having little to nothing left over at the end of the month even when you don’t live in Manhattan.

The result of these tweets has been a mass dragging of the rich that might bring some comfort to those of us laughing from our one-bedroom rented apartments an hour outside any metropolitan area in between stressing about rent increases and student loan bills: