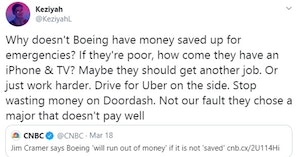 The U.S. Senate is expected to pass its $2 trillion emergency stimulus bill today, which will include $1200 for individuals as well as a $500 billion slush fund for big corporations suffering losses from the coronavirus pandemic. This slush fund was a point of contention that resulted in the bill being stalled as Democrats and Republicans negotiated, with Democrats resisting the idea of pouring a ton of money into companies who used previous bailouts to buy up their own stocks.

Additionally, a large segment of the common people is not thrilled that so much of the stimulus package goes to these companies while they’re only getting a one-time payment of $1200, which won’t even cover rent for many Americans.

One woman thought that instead of money, companies like Boeing should consider some of the largely useless advice often tossed to poor people in their time of need.

Why doesn't Boeing have money saved up for emergencies? If they're poor, how come they have an iPhone & TV? Maybe they should get another job. Or just work harder. Drive for Uber on the side. Stop wasting money on Doordash. Not our fault they chose a major that doesn't pay well https://t.co/ScyYooihSy

Keziyah’s thread echoes the exact words often used to dismiss the idea of actually helping those living in or near poverty, putting the blame for their predicaments entirely on their shoulders and throwing out suggestions that poor people have definitely already considered if they were at all feasible.

If Boeing really wanted to, they could work, go to school, start a business, and take care of their kids at the same time. Boeing doesn't need sleep. That's just another excuse.

If you really want something, you make it happen no matter what.

The brilliance of turning this kind of rhetoric around on the kind of people who tend to use in on the poor is that it doesn’t take the reality of their situation into account, just like rich people don’t take the reality of poverty into account when they do it. Of course, Boeing can’t just “go to school” or start a new business—neither can the vast majority of those living in poverty, often due to a lack of time because they’re already working multiple jobs just to get by.

If you're a struggling company like Boeing and this thread inspired you, I help multi billion dollar companies achieve financial freedom by teaching them to start side hustles, invest in cryptocurrencies, and flip houses.

The thread raises the question as to why companies like Boeing, which are largely useless during a pandemic, get all the money they need while workers now deemed “essential” after decades of being demeaned as “low-skilled” such as grocery clerks and delivery drivers are only getting $1200.

Meanwhile, other non-corporation people are jumping on board to mock big companies with more of the kind of useless advice that is often thrown at people who are struggling financially.

They need to stop buying lattes and eating avocado toast.

They also should start living within their means. Maybe they need to move back in with their parents.

Boeing just has a starter job. They should move to another city if they can’t pay rent.

its unbelievable, have you seen there planes, flat screen tv’s on every one

They should have a 6 month emergency fund. Should have saved their tax cut.

Maybe Boening can start a goFundMe page like when we need healthcare.

Boeing just needs to put on their best suit, march down to the hiring office and tell them they’re able to start that day.

And make coffee at home instead of getting it from Starbucks

Has Boeing thought about going to a trade school?