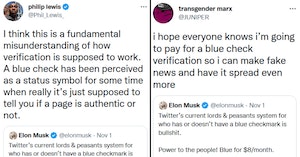 As either an attempt to make up some of the massive debt he now owes to the Saudis, burn Twitter to the ground, or something something free speech, Elon Musk has confirmed that it will soon cost $8 per month to get a verification check next to one’s display name. There has already been a massive backlash to this plan as people point out that it completely destroys the actual purpose of the verification check and turns it into a cynical bit of clout that anyone could use to mislead people.

Somehow, Musk thought it was a good idea to try and frame this as an equalizer, claiming that the free check offered to help users know which accounts are real and which are imposters was a “lords & peasants system.” He did not explain how the peasants are supposed to afford $8 per month.

Musk listed some of the benefits people will get for participating in this latest “pay to play” system, which never goes wrong or destroys any industries ever, but did not explain how he will stop trolls and bots from buying the check to impersonate others. He says there will still be a secondary tag for public figures like politicians, but didn’t mention how people will know which people with the word “journalist” or “reporter” in their bio to trust and which are QAnon.

This is what happens when you let a reply guy take over Twitter.

No amount of attempts at humor, even self-deprecating, has stopped Twitter users from widely panning this idea (outside of the ride-or-die Musk fans), with many currently verified users saying they will not pay any price for this feature. Others are simply annihilating the claim that making people pay money for a little virtual badge is the opposite of creating equality, but we wouldn’t expect a billionaire who got all his money from an apartheid emerald mine inheritance to understand this.