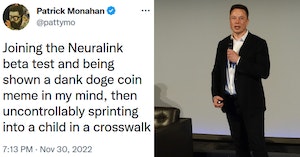 As Elon Musk systematically seemingly destroys Twitter, the busy guy had an announcement about his other dystopian future company. The billionaire said Wednesday night that Neuralink — the brain implant that is dropping test monkeys left and right — will be ready for human trials in just six months, assuming the FDA approves the venture.

According to Bloomberg, the coin-sized device may soon be put into some unfortunate humans’ brains by a robot that carves out a piece of your skull and puts the chip plus “electrode-laced wires” inside. Musk has made wild claims about the device’s capabilities, from being able to play Pong with only your brain to curing paralysis and blindness.

As usual, actual scientists and other experts are widely warning that Musk is far-overhyping the technology’s capabilities and dreaming up possibilities that may never come to pass, much like his dream of making Mars a habitable planet for humans. Others are looking with horror at reports that a large number of the monkeys this thing was tested on died, some having to be euthanized after they couldn’t stop vomiting or after they showed significant psychological decline.

Other reports detail brain bleeds, infections, and seizures in monkeys with the implant.

These horror stories naturally have people nervous about the future of Neuralink and what it might do to human brains, especially considering reports of Teslas randomly bursting into flames or going haywire. Additionally, there are a whole lot of jokes about its mind-control potential, and what Musk might make you do if you get the implant, which many of his fans are clamoring for after screaming for years that the COVID vaccine was a brain chip trick.